Woman dedicated to raising money in memory of grandfather 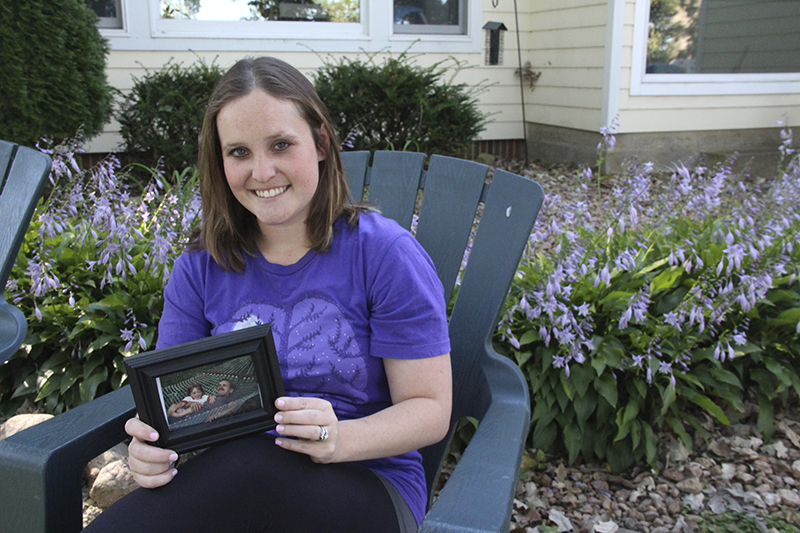 Albert Lean Amanda Irvine and her family will participate in the Alzheimer’s Association’s Walk to End Alzheimer’s on Saturday in Owatonna. Irvine said she walks in memory of her grandfather, Wayne Weiss, who died from the disease when he was 68. - Sarah Stultz/Albert Lea Tribune

Albert Lean Amanda Irvine has fond memories of her grandfather.

It’s with these memories and a motivation to make a difference that Irvine and some of her family members will participate this weekend in the Alzheimer’s Association Walk to End Alzheimer’s in Owatonna.

The event, which will be at Mineral Springs Park in Owatonna on Sunday, begins with registration at 9 a.m. and an opening ceremony at 10 a.m. People can walk either one mile or three miles during the event, and there are also games, food and advocacy about Alzheimer’s awareness. The goal is to raise $58,000, which goes to support family programs, support groups and further research.

Irvine said she has been participating in Alzheimer’s awareness walks since 2011 in Mankato. She has also participated in a walk in Des Moines before starting the one in Owatonna in 2014.

“The disease truly affects everyone around the person and not just the individual,” she said. “This is a nice way to honor my grandpa and keep his memory alive.”

Irvine said her grandfather, Wayne Weiss, was 52 years old when he was diagnosed with Alzheimer’s disease.

In the beginning, she said, the changes in him were subtle. Her grandpa would forget simple things like a name or a date. Eventually, however, the disease progressed to the point where he wasn’t able to talk, they thought he was blind and he was bedridden.

He lived at Good Samaritan Society of Albert Lea for his last four years of life.

“I remember when the family had to take his driver’s license away,” she said. “That’s something no one ever wants to lose.”

Her grandfather died at the age of 68.

Irvine said she it is her dream to have an Alzheimer’s walk in Albert Lea similar to the others she has attended. She asked if people are interested in this effort to contact her at 383-4351.

Irvine grew up in Glenville, but has lived in Albert Lea since 2011 after she graduated college.

She married her husband, Andrew, in 2013, and together they have a 20-month-old daughter named Cecelia.

Interesting fact: Amanda said she met her husband while speaking at a rotary meeting. He was in the crowd, and she was the speaker