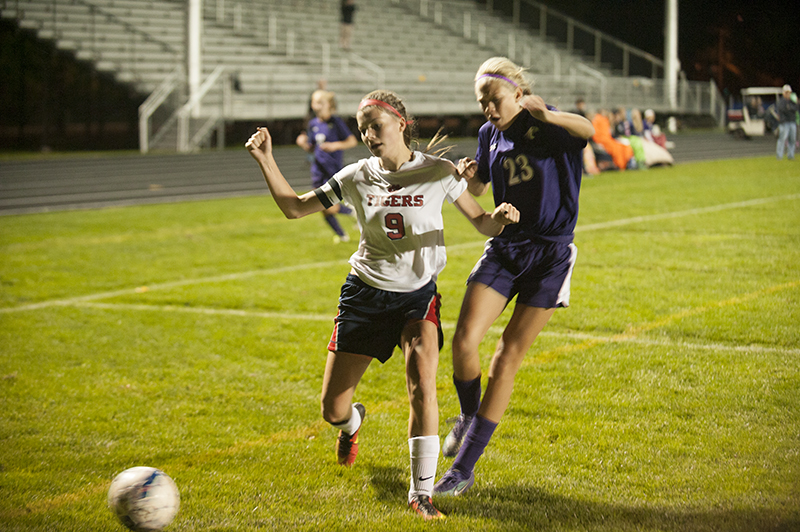 Albert Lea’s Rachel Rehnelt boxes out New Ulm’s Hannah Osborne as both players battle for the ball during the first half. Jarrod Peterson/Albert Lea Tribune

The Albert Lea girls’ soccer team hosted the New Ulm Eagles in the first round of the section tournament  Monday night.

The Tigers’ offense experienced some struggles at the end of the season scoring goals, but that didn’t carry over to Monday’s game, as the Tigers scored four goals — two in each half — and goalkeeper Kathryn Flaherty earned another shutout in a 4-0 win.

Eighth-grader Lucy Sherman got the scoring started when she struck a shot that bounced off the goalie’s hands and over her head into the goal 12 minutes into the contest.

The Tigers thought they scored their second goal of the game when Claire Sherman bounced a heading attempt off the goalie and Ashley Butt tapped it in, but Butt was called for offsides on the play.

The Tigers didn’t worry about that call for long, as Turena Schultz rifled a shot from 10 yards out that zoomed over the goalie’s head to put the Tigers in front at halftime, 2-0.

Rachel Rehnelt and Claire Sherman each added a goal late in the second half. Rehnelt’s was a header that came off a corner kick corner from Schultz and Sherman’s was a product of great passing between Callie Hanson, Sherman and Rehnelt before Sherman finished it off.

Coach Laura Wangen said her team’s hard work all season helped put them in this season. 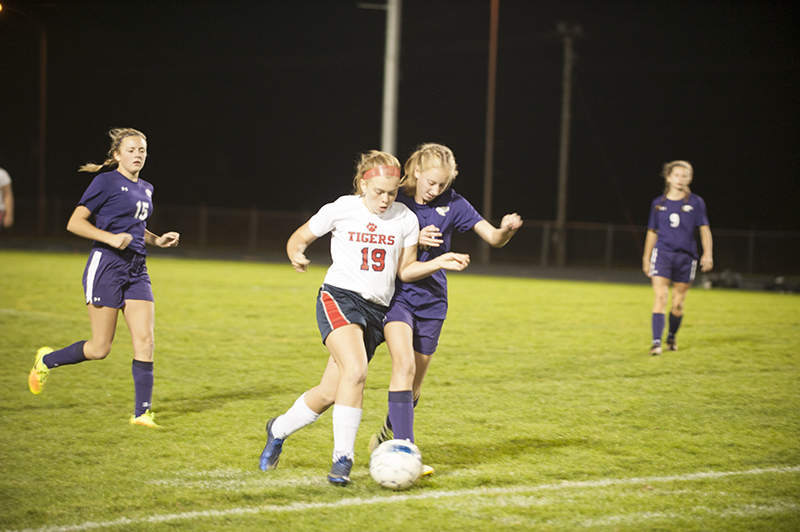 Albert Lea’s Sydney Nelson tries to get past New Ulm’s Kaye Rysdahl in the second half of Monday’s first-round section game at Hammer Sports Complex.

“The girls have been working very hard this year to accomplish things this year, as team,” Wangen said. “Monday’s victory fell nothing short of that.”

Flaherty’s shutout was her sixth of the season, and the defensive line of Sydney Doran, Ella Zelenak, Laura Flaherty and Madeline Funk made it difficult for the Eagles to get solid scoring chances all night.

“It is exciting to see the team coming together in the postseason,” Wangen said. “This is the time of year where every play and every player’s role it vital for success of the team as a whole.”