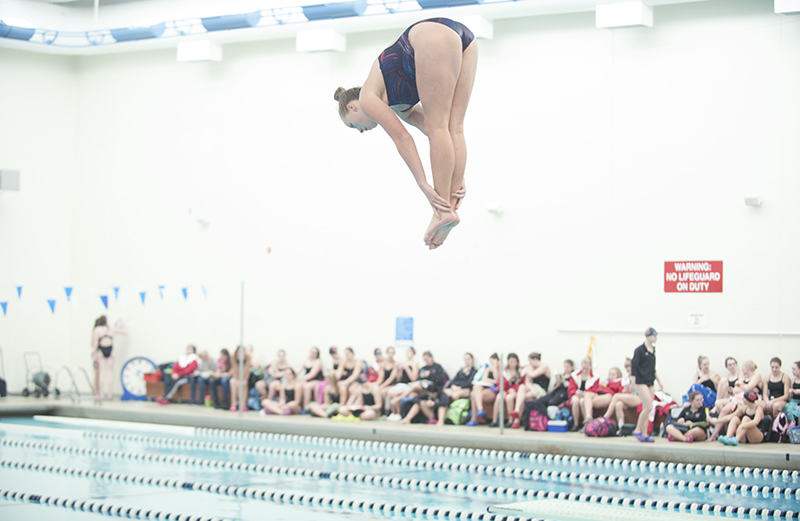 Albert Lea’s Natalie Nafzger prepares for her descent into the water during the diving portion of the swim meet Thursday night at Albert Lea High School. She placed second in the diving competition. Jarrod Peterson/Albert Lea Tribune

Coming into Thursday’s matchup, the Tigers were still looking for their first victory of the season. Unfortunately, they will have to wait just a bit longer, as the Tigers fell to the Cougars, 97-77.

Jaeda Koziolek finished in second place in the 200-yard individual medley with a time of 2:27.73, three seconds behind Mankato West’s Sarah Patenaude. Emily Jensen finished fifth in the race for the Tigers with a time of 2:51.11.

Once again, Albert Lea’s Emily Taylor was strong in the 50 freestyle. She took first place in a time of 25.98. Lexie Simon finished fifth in a time of 29.14 and Jill Peterson took sixth with a time of 29.58.

In the one-meter diving event, Albert Lea’s only diver, Natalie Nafzger, had a strong showing. She came in second place with an overall score of 145.60.

Alana Skarstad was Albert Lea’s best performer in the 100 freestyle, coming in third with a time of 1:02.15. Lydia Boorsma came in fifth and Emma Grossman finished in sixth with times of 1:02.71 and 1:05.25, respectively.

The team of Taylor, Peterson, Simon and Skarstad won the 200 relay event by three seconds over Mankato West. The foursome finished with a blazing time of 1:54.70.

Start time for the meet is scheduled for 6 p.m.