An Albert Lea woman charged with passing and offering fraudulent checks pleaded guilty Wednesday in Freeborn County District Court to one count of possessing with the intent to offer a forged check. 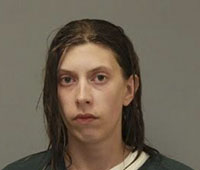 While in route, authorities were reportedly advised that one of the suspects had left a business in a blue van and another had left on foot.

Brigston was reportedly the driver of the blue van.

After a bookkeeper at the store identified a check received by the store as fraudulent, Brigston and another person attempted to pass a similar check at the store that was stopped by employees, court documents state.

Several fraudulent checks were reportedly identified as being cashed and offered by Brigston and Ryan Johnson, including:

Court documents state a search warrant of Brigston’s van found a new Canon printer in an opened box, along with a personal and business check starter pack, blank checks printed on pink, butterfly-patterned paper bearing Hernandez’s name and a black blue-check paper used for the fraudulent checks offered in July by Brigston and the other woman.

A witness who manages a convenience store in Albert Lea reported that a check cashed by Brigston for $386.37 was returned by a bank.

Ryan Johnson has been charged with one count of felony offering a forged check. His next court appearance is Dec. 28.

Two other people have listed in court documents not been charged in the incidents. Hernandez could still be charged, according to the Freeborn County Attorney’s Office.