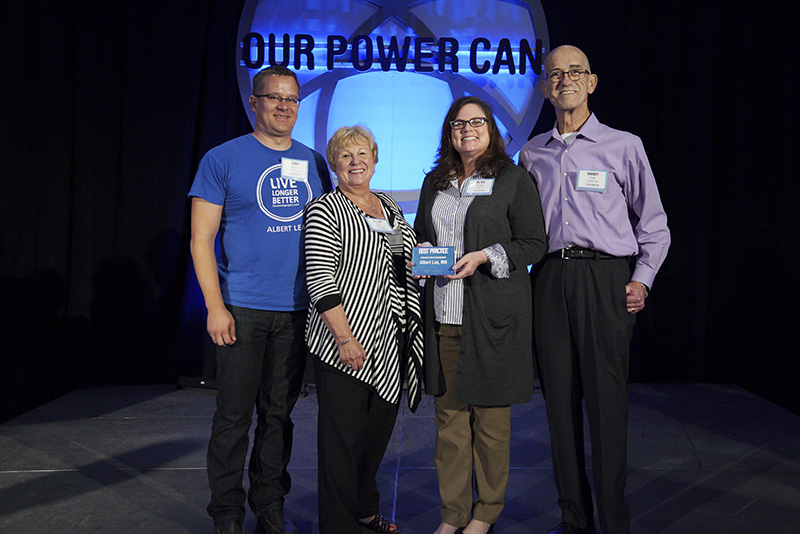 Albert Lea has been involved in the initiative since 2009 and became a certified Blue Zones Community in 2016.

Albert Lea received the Tobacco-Free Cities Award for its work in best practice in tobacco-free environment. Starting in 2009, Blue Zones Project began working with the city of Albert Lea to drive policy and environmental changes for a measured reduction in tobacco usage. This included changes for public housing, public parks and events, outdoor dining, as well as partnering with local businesses.

Success had the potential of reducing health care costs by $6,000 per year, per smoker. Given the challenge of trying to implement this change and provide a new outlook toward this important public health issue, the city chose to make incremental moves over time, which have made a big impact.

Policy changes eliminated the use of Tobacco at 507 units of public housing, 11 of the top 20 worksites and additional select businesses, outdoor dining at restaurants, public parks, county fairs and other outdoor events and sporting events at public facilities.

The Well-Being Index results show that smoking dropped considerably in Albert Lea and now is less than 15 percent, far below the national average of 18.5 percent in 2015.

This has resulted in $8.5 million savings in annual health care costs for Albert Lea employers from the decline in tobacco use.

“It is really exciting to see community leaders work together to meet the challenges associated with obesity and chronic disease in America head-on,” said Katrina Worlund, vice president of Blue Zones Project.  “With this honor, Albert Lea demonstrates its commitment to innovative thinking and shares in the vision of making communities across the nation healthier.”

For Albert Lea, the recognition is one to be shared and celebrated across the community, at schools, worksites, restaurants and grocery stores that have joined the Blue Zones Project movement —and with individuals who incorporate Blue Zones Project principles into their daily lives.

“This is a recognition of the commitment our community has made to enhancing the well-being of its citizens, and a testament to the community leaders and volunteers who are making that promise a reality,” said Ellen Kehr, organizational lead of Blue Zones Project in Albert Lea. “We are at the forefront of a well-being movement that is gaining traction across the country, and we will continue our work to become one of the healthiest cities in the nation.”