Albert Lea man charged with having knife at courthouse

An Albert Lea man is facing prison time after reportedly possessing a folding knife in August in the Freeborn County Courthouse.

Alex Cortez Jr., 22, was charged Aug. 26 with possessing a dangerous weapon in a courthouse complex. His first appearance on the charge was Thursday in Freeborn County District Court. 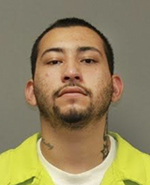 Court documents state law enforcement responded to a report of a verbal altercation outside of a courtroom at the courthouse Aug. 24.

A deputy reportedly removed a black, approximately 9-inch folding knife with an approximately 4-inch long titanium blade from Cortez’s pocket. Another man outside the courtroom stated he had been at the courthouse alone to watch a hearing for a case in which his mother’s ex-husband was charged, court documents state.

The man reportedly called Cortez to the courthouse to “have his back in case anything happened,” court documents stated.

One person at the hearing told authorities she and Cortez exchanged words as she was leaving and that he reportedly told her he knew where she sleeps.

In a Mirandized interview, Cortez reportedly said he had came to the courthouse at the request of the man, and claimed he puts his pocket knife in his pocket in the morning when he gets dressed.

Cortez denied telling anyone “I know where you sleep,” court documents state. He reportedly told law enforcement that he had only said “You don’t know who I am.”

Cortez was released on his own recognizance Thursday, and signed a waiver of extradition.

His next court appearance is scheduled for Oct. 13.

Possessing a dangerous weapon in a courthouse carries a maximum sentence of five years in prison and a $10,000 fine.