Funeral services for Ardis J. Bergo Thovson will be at 1 p.m. Thursday at Grace Lutheran Church in Albert Lea. The Revs. Shane Koepke and Kent Otterman will officiate. Visitation will be from 5 to 7 p.m. Wednesday at Bonnerup Funeral Service, as well as one hour prior to the service at the church. Interment will take place at Hillcrest Cemetery. 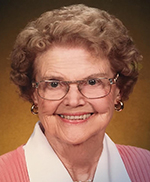 Ardis J. (Peterson) was born Sept. 16, 1921, in Garden City, Iowa, to Porter and Bertha (Jensen) Peterson. She grew up and graduated from Lake Mills High School. She was united in marriage to Irving Bergo in 1939 at Silver Lake Lutheran Church. To this union, six children were born. The couple later divorced. On March 25, 1978, she married James Thovson. James passed away in 1994.

Ardis was a charter member of Grace Lutheran Church.  She was active in the church in many ways and was proud of being a part of the Sunday school program for more than 30 years. She was a member of the Naeve Hospital Auxiliary, American Red Cross and Take Off Pounds Sensibly Club since 1973. She received the KOPS award for 35 years of participation in TOPS.

Ardis was a mother to six children and kept up a wonderful home. In her free time, she enjoyed baking — peanut brittle was a family favorite. She enjoyed going on walks and walked over four miles every day. Ardis enjoyed keeping up with family history and tried to keep in touch with relatives as much as she could. Ardis’ faith was a large part of her life and she rarely missed church on Sunday. Most of all, Ardis loved her family — especially her grandchildren and great-grandchildren. She was a caring, outgoing and loving person, who always put others ahead of herself.