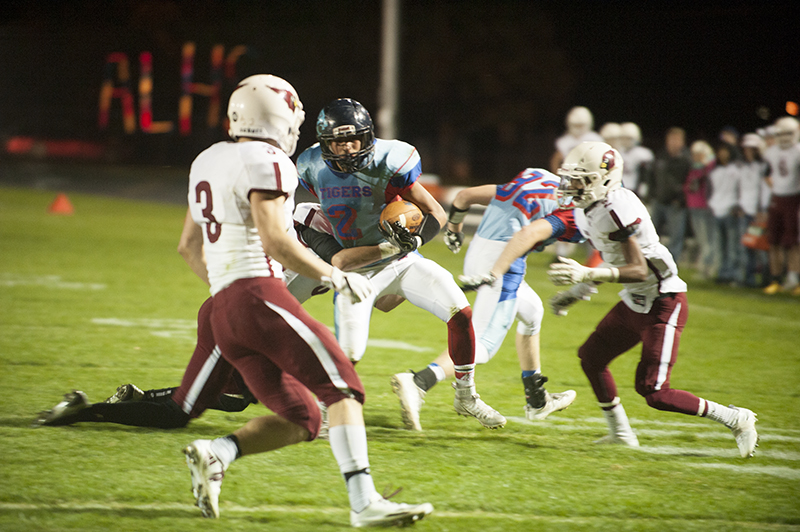 Albert Lea running back Jessie Hernandez tries to break a tackle during the first half of Friday’s game against Fairmont. Hernandez finished the game with 30 rushing yards and a touchdown. Jarrod Peterson/Albert Lea Tribune

s the regular season draws to a close, the Albert Lea football team was looking to build some momentum as it welcomed the Fairmont Cardinals to Jim Gustafson Field Friday night.

However, the Albert Lea defense had no answer for Fairmont junior quarterback Nathan Kallenbach.

Kallenbach ran for three scores and threw for another in the first half to lift the Cardinals to a 48-15 win.

“We played hard, but had a few mistakes at key times,” said Tigers coach Corey Black.

Fairmont got on the board early in the first quarter thanks to two third-down conversions by Hallenbach. After the second conversion, Hallenbach took the next play into the end zone on a 15-yard run.

Later in the half, Hallenbach had touchdown runs of 47 and 67 yards, then he completed a 15-yard touchdown pass to Sam Schwieger to put the Cardinals up 28-0.

The final score of the half would come courtesy of Cory Lyons on a 1-yard run. 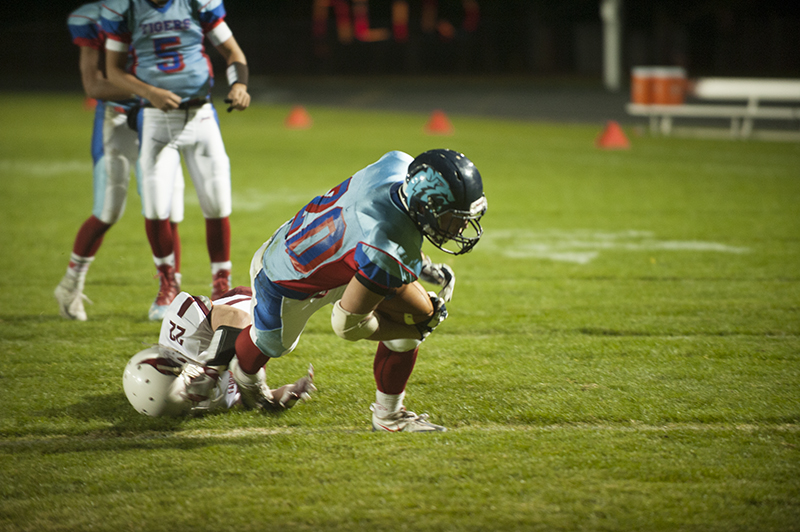 Albert Lea running back Dylan Lestrud falls forward after running through a tackle by Fairmont’s Cody Freese in the first half Friday night. Lestrud led the Tigers in rushing yards with 69 on 12 carries.

“(Fairmont) is a very talented team and they play a controlled style of football,” Black said. “They don’t make a whole lot of mistakes, and have the ability to put you in uncomfortable positions through their ability to cover and tackle.”

Faced with a 35-point deficit heading into the final 24 minutes of the game, the Tigers could have packed it in and started looking ahead to next week’s game against St. Peter. Instead, Albert Lea showed some life in the final two quarters.

Schwieger picked off a pass by quarterback Sam Chalmers and returned it to the 1-yard line. On the next play, the Cardinals scored to go up 42-0. But then the Cardinals started making some mistakes. A snap over  Fairmont backup quarterback Alex Kotewa’s head led to a safety for the Tigers.

When the Tigers got the ball back, Chalmers found wide receiver Ben Witham for a 46-yard gain that brought the ball to inside the 10-yard line. A play later, Jessie Hernandez bowled over a defender for a touchdown.

The start of the fourth quarter also looked promising for the Tigers. They picked off Kotewa, but, then gave it right back as Chalmers pass was deflected and intercepted. Still, the Tigers defense held strong.

When Chalmers and the offense got the ball back, he made up for his mistake by finding Josh Forde down the left side of the field for a huge gain down to the 5-yard line. Trent Johnston was able to do the rest, as he made it 42-15 with a touchdown run.

“Our young guys stepped up and made some big plays tonight,” Black said. “Sophomore (Cole Wentzel) had the best game of his career with an interception and some other big plays.”

Wentzel led the Tigers with 11 tackles.

Chalmers finished the game 8-20 for 127 yards and Witham had four catches for 64 yards.

Albert Lea will host St. Peter in its final regular season game of the year.

The two teams will play Wednesday.