Cancer survivor urges awareness this month and throughout year 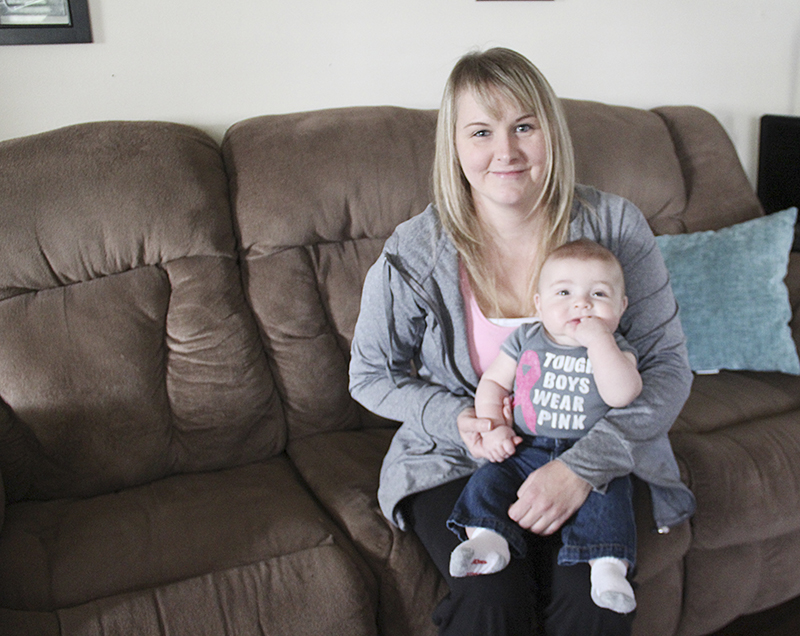 Sitting on the couch, she went to scratch an itch and found a lump on her right breast.

Larsen said after a mammogram and an ultrasound, doctors told her it was just a benign cyst and it was nothing to worry about.

She returned home that day.

Though she was told she needed a follow-up appointment, she didn’t think much of it because she was told the spot was benign.

A few months later, a woman she did not know walked into the salon where she worked and told her about her daughter who had breast cancer. She, too, was initially told she didn’t have cancer, but later found out she actually did.That woman’s daughter later died from the disease.

“After she left, I said, ‘We need to get in there and and get it taken out,’” she said.

Two days after the mass was removed — in November 2011 — at the age of 30 she said she was diagnosed with triple negative breast cancer.

She had a double mastectomy over Christmas and then in January started chemotherapy, which she completed in May 2012 over a five-month span.

She has been cancer-free ever since.

Larsen said since then she has completed genetic testing to find out if her daughter carries the gene for the disease. She does not.

In light of Breast Cancer Awareness Month, Larsen said she advises women to self exam. If they find anything even remotely questionable, ask for a biopsy.

“I always say get a biopsy,” she said. “If I hadn’t gotten a biopsy, I probably wouldn’t be here right now.”

She also advised people to remember that different types of machinery are available at Mayo Clinic in Rochester that are better for certain breast types.

She said living through cancer and chemotherapy has taught her many lessons. Her perspective on life has changed, and she and her family are doing more things they normally wouldn’t do.

• One in eight women in the United States will be diagnosed with breast cancer in her lifetime.

• Breast cancer is the most commonly diagnosed cancer in women.

• Breast cancer is the second leading cause of cancer death among women.

• Each year, it is estimated that over 246,660 women in the United States will be diagnosed with breast cancer, and more than 40,000 will die.

• Each year, 2,600 men will be diagnosed with breast cancer and approximately 440 will die.

• On average, every two minutes, a woman is diagnosed with breast cancer.

• Over 2.8 million breast cancer survivors are alive in the United States today.