Funeral services for Carolyn Jeanne VanderWoude, 86,  of Albert Lea will be at 11 a.m. Friday at Bonnerup Funeral Service in Albert Lea. The Rev. John Mitchem will officiate. Visitation will be from 4 to 7 p.m. Thursday at Bonnerup Funeral Service. Interment will be in Hollandale Cemetery. Carolyn died Saturday, Oct. 8, 2016, at Thorne Crest Senior Living Community in Albert Lea. She was 86. 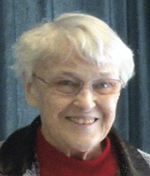 Carolyn was born Nov. 27, 1929, in Pipestone, the daughter of Walter and Cecelia (Meyer) Lange. She graduated from Pipestone High School in 1948, attended Hamline University, the University of Utah, and received her Bachelor of Arts in music from Hope College in Holland, Michigan. In 1987, she received her master’s degree from the Minnesota State University in Mankato.

She was united in marriage to M. Paul VanderWoude on July 23, 1953, in Pipestone.

Together, the couple made their home in Pipestone; Holland; Lynden, Washington; Vancouver, Canada; Springfield, South Dakota; Hull, Iowa; Hollandale; Tofte; and Albert Lea. Carolyn had been employed as a special education teacher in District No. 241 from 1979; retiring in 1992. She taught kindergarten and elementary music in Holland, special education in Boydon-Hull, Iowa, and at the Hope Haven School for the handicapped. She taught private piano, voice and organ for many years. Carolyn was a member of the Washington Music Teachers, South Dakota Music Teachers Association, American Association of University Women, Albert Lea Area Retired Educators Association of Minnesota, Albert Lea Lions Club and the Albert Lea Cantori.

She loved music and played in the Hope College Orchestra, sang in the Hamline A Cappella Choir, Hamline singers, Hope College Chapel Choir, community choirs, played for many ACT productions, directed several church choirs, originated the children’s choir Choristers in Hollandale and was director of music and fine arts at the United Methodist Church in Albert Lea.

She was a member of the Evangelical United Brethren prior to her marriage and the Reformed Church in America, where she shared her husband’s ministry. In Albert Lea she was a member of United Methodist Church.

Carolyn is survived by her children Jon (Cindy) VanderWoude of Monroe, Washington, Joel (John Frakes) VanderWoude of Palm Springs, California, Peter (June) VanderWoude of Matthews, North Carolina, and Cathleen Sweetland of Flint, Michigan. There is one grandchild, Sara VanderWoude, and many nieces and nephews.