Prayer services for Dale W. Murphy will be at 1:30 p.m. Wednesday at Bonnerup Funeral Service in Albert Lea. The Rev. Russell Scepaniak will officiate. Interment will be in St. Theodore Cemetery. Military honors will be accorded by Albert Lea veterans organizations. Friends may visit with family from 12:30 to 1:30 p.m. at the funeral home.

He attended Lyle High School and then served his country in the U.S. Army. He served as a medic and on border patrol from January 1965, receiving his honorable discharge from the Reserves in 1971. 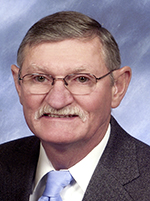 He was united in marriage to Judy Budin on Oct. 15, 1977, at St. Theodore Catholic Church.

Dale worked at Queen Stoves and Streater in Albert Lea and later at Hormel in Austin, retiring in 2011.

He was a member of the Eagles and the American Legion.

Dale had many varied interests, which included playing hand-held video games, watching the Minnesota Vikings and NASCAR racing, fishing, camping, road trips and hunting for antiques. He also enjoyed attending the demo derby with his grandson, and mentoring Travis in his Eagle Scout pursuit. He was an especially talented woodworker and had the ability to fix anything. His dog, Jackie, was his constant companion.

He was preceded in death by his parents; his brothers Elton, DeWayne and Doug; father-in- law and mother-in- law Edward and Myrtle Budin; sister-in-law, Bernice Murphy; and brother-in-law Harold Keller.

Dale will be sadly missed by all who knew and loved him.