Memorial services will be at 11 a.m. Saturday at Patton Funeral Home and Cremation Service, 400 E. 14th St., Blue Earth. The Rev. Russ Jacobsen will officiate. Burial will take place at a later date. Visitation time will be from 9:30 a.m. Saturday until the time of the service at the funeral home. 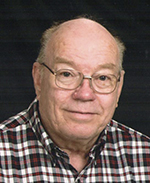 Danny was born June 7, 1944, in Blue Earth, the son of Ernest and Irene (Haase) Sasse. He was raised on a farm in the rural Blue Earth/Frost area. He graduated from Frost High School in 1962. After high school Danny attended Mankato State University. On Aug. 14, 1965, he married Pamela Sankey, to this union three children were born. On Feb. 14, 1987, he married Candy Earl at Salem United Methodist Church. For over 40 years he worked for Coca-Cola around the Albert Lea area. Following retirement he and Candy moved to Blue Earth and spent their winters in Pharr, Texas. He was a member of the Elks Lodge, Moose Lodge, Teamster’s Union, Methodist Church, 4-H Club and Border Riders Saddle Club.

A memorial has been established in Danny’s name to the Faribault County Humane Society or Interfaith Caregivers.