Funeral services will be at 2 p.m. Monday at Salem Lutheran Church in Lake Mills with the Rev. Melinda McCluskey officiating. Burial will take place in Salem Memorial Cemetery.

Visitation will be from 5 to 7 p.m. today at Salem Lutheran Church, 401 S. Lake St. in Lake Mills, and will continue one hour prior to the service on Monday. Mittelstadt Funeral Home in Lake Mills is in charge of arrangements. 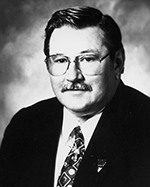 David Edgar Steffens, son of Ray and Lucille (Anderson) Steffens, was born Oct. 28, 1938, in Kanawha, Iowa. He was confirmed at Salem Lutheran Church in Lake Mills. He graduated from Lake Mills High School on 1956.

Dave then went on to marry Bonnie Fjelstad of Lake Mills on Sept. 8, 1957, at Salem Lutheran Church in Lake Mills. Together they had three children: David A., Michael and Jay.

Dave is preceded in death by his parents Ray and Lucille Steffens; in-laws Leonard and Evelyn Fjelstad; and one sister-in-law, Mary.

Dave — or “SR,” as many called him — lived a full and happy life. He was a go-getter and never let obstacles get in his way. If he saw an opportunity, he took it!

With a young family, Dave first set his sights on being a captain of the Sheriff’s Department of Blue Earth County. After succeeding at that for 11 years and getting some good stories to pass along, Dave decided it was time to find something that his boys could be a part of, and he set off to make Norsemen Trucking a very successful family-run trucking company. After 23 years of building up a wonderful company, Dave and Bonnie decided it was time to retire and focus on the other fun stuff they liked doing.

Dave did not truly understand what retirement meant, as he continued to be an outstanding mayor of Lake Mills for six more years, finishing up his 14-year stint.

When it was time for fun he had no problem finding one of the many hobbies he enjoyed to do. Some of his favorites were hunting with Wolfe, riding motorcycles, flying his plane, fishing and traveling.

All the joys in Dave’s life depended on the love and connection to his family and friends. He was a man of honor and truth. If ever you needed a straight answer or help, he was the guy you turned to. He will forever be remembered and loved. Dave left a huge impression on this world and the people who were around him.