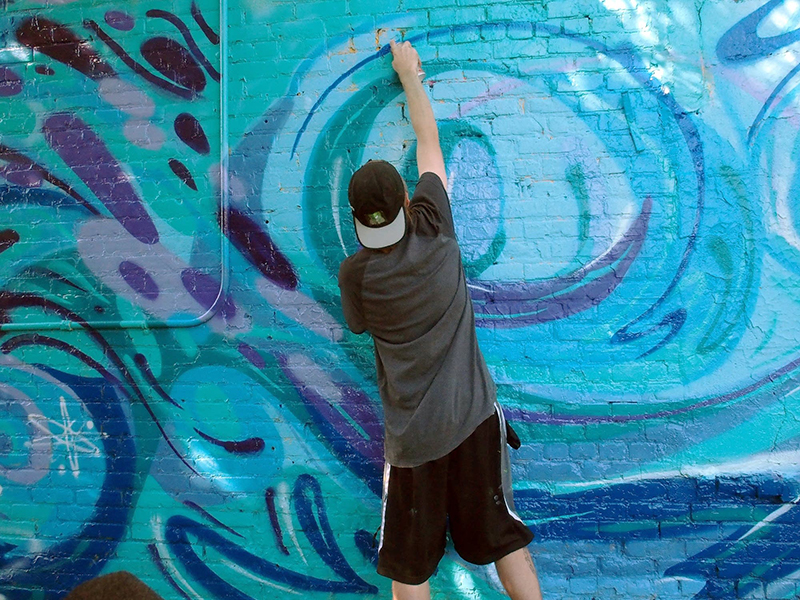 Kater paints a mural on the outside of the Rayito de Sol Spanish Preschool in Minneapolis on Sept. 14. The piece was a donation to the school, which stands on Nicollet on the edge of downtown, but backs on to Interstate 94. - Euan Kerr/MPR News 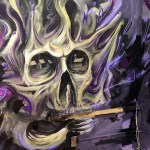 This piece shows one of the approaches Kater often takes — placing a scene within a scene. He said he will fill this room with artwork, each including a clock. – Euan Kerr/MPR News 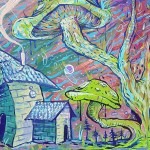 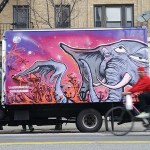 Kater decorates vans — with their owners’ permission. – Courtesy of Kater 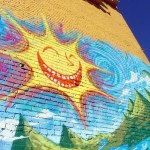 A detail of Kater’s mural on the side of the Rayito de Sol Spanish Preschool in Minneapolis on Sept. 14. The piece was a donation to the school, which stands on Nicollet on the edge of downtown, but backs on to Interstate 94. The mural can be seen by tens of thousands of people every day as they drive west on the freeway neat the Hennepin-Lyndale exit. -Euan Kerr/MPR News 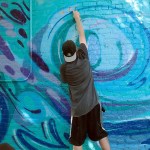 Kater paints a mural on the outside of the Rayito de Sol Spanish Preschool in Minneapolis on Sept. 14. The piece was a donation to the school, which stands on Nicollet on the edge of downtown, but backs on to Interstate 94. – Euan Kerr/MPR News

Twin Cities artist Kater is a man of mystery — with a cult following.

While he keeps his identity secret, he’s amassed a large online community of collectors who snap up his limited-edition prints. If you can imagine how Dr. Seuss would paint after having a nightmare, then you have some idea of Kater’s style.

For someone who wants to keep his identity secret, he loves to talk. On an early fall day, Kater led a tour through a glassblowers’ studio on Chester Street in St. Paul, just over the river from downtown, between Hwy. 52 and the downtown airport.

“Yeah, these guys are glassblowers that I just met,” he said, speaking in a surfer-dude style born of his childhood in Hawaii. “They just invited me into their space, just to paint a mural for fun. And then after an hour I was like, ‘You wanna do a show here?’ And he was like, ‘Yeah!’”

The show, his first-ever gallery event, will take place Saturday. Halloween is his favorite time of the year.

He loped around the studio space, pointing out areas where he’s been hard at work. The wall of one room is painted with a skull, a village embedded in its eye sockets. It’s just for a background, though.

Next door, a ghoul rides an irritated-looking ostrich. Kater described the painting’s style as Dr. Seuss by way of Ralph Steadman.

It’s been quite a trip to this point in Kater’s career. As one of the few white kids in his school in Hawaii, he felt pretty isolated. When he was 13, a fellow student called Malcolm asked him a question that changed his life.

They headed up into the dry canals in the hills above where he lived. He found it was covered in what some would call graffiti, and others, art.

“It almost upset me,” he said. “I was so inspired and upset at the same time. It was such a strange feeling. To see artwork that people put their time and energy into, that was like amazing, that no one could see or appreciate, that was hidden under these walls.”

The experience launched his artistic career, and a fair bit of running from the cops. He eventually moved to Minnesota to attend the Minneapolis College of Art and Design, where he had more brushes with the law before deciding to go straight.

He eventually decided to focus on murals and dropped out of MCAD. It was tough. He lived in his car for a spell. However, he discovered a market for his work online.

He pulled up a computer to check his Facebook page, Kater the Alchemist. It’s where he sells prints, canvases and other items, including enameled collector pins.

“Oh, the new pins just dropped!” he said. “There are pins that I made that I have never seen before. … Someone just sent me these.”

The pins, like all his artwork, will be snapped up.

“These are all the posts from today,” he said, scrolling down through item after item. “We’ve been blowing up, so to say.”

Kater will paint a canvas and make prints, usually 20 to 60 of them. He’ll auction the canvas and sell the prints for a fixed price. They move fast. He pointed to one recent sale: “We sold like 55 prints in 11 minutes,” he said. “It was the fastest that we have ever sold the prints.”

What’s remarkable about this is that none of the people collecting his art know Kater’s identity. He said anonymity is important.

“And I’ll tell you why,” he said. “You are forced to look at Kater art as just the art, because you have no idea who I am. So when you lose that aspect of the art, it’s just about the artwork.”

There are close to 3,000 people who follow Kater’s Facebook page. One of them is Daniel Schwartz, 19, a college student from Long Island, N.Y.

“Let me just do some quick math, because I just did buy a couple the other day,” he said. “I’d say I have between 20 and 25 pins, and I want to say I have roughly the same number of prints, actually.”

Schwartz has been collecting Kater’s work since the beginning of the year. The subject matter appeals to him, as does interacting with Kater’s online fan base.

“I think it’s more so the community, honestly,” he said. “There are some really stand-up people that I would go so far as to call friends of mine, even though I have never met them.”

Jackie Aitken, who works in the oil industry in Houston, Texas, said there is “definitely something mystical” about Kater’s pieces.

She has roughly 60 prints, 50 pins, 20 ink sketches and two Kater canvases. She acknowledged Kater’s work isn’t for everyone, but she finds looking at the pieces she has inspirational. She particularly likes the gnarled, scowling faces he paints.

“It’s like your old grumpy uncle that wasn’t the most attractive person, but there was something calming about him,” she said. “And I always felt that way about Kater’s work.”

She’s had a tough time recently, undergoing treatment for cancer. She has tried to make sure she has a full set of Kater’s prints, and other Kater fans, knowing her situation, have bought prints for her. She recently got word that she’s cancer-free, and said what she calls “the Kater family” has been a huge support for her.

“Discovering Kater and the whole community and all of the art has played a massive part in keeping me sane over the past year,” she said.

Even while preparing the gallery for Saturday’s show, Kater has been working on a mural visible to anyone driving west on Interstate 94 in Minneapolis. The Rayito de Sol Spanish preschool sits above the freeway near the Hennepin-Lyndale exit. Kater and some friends covered the side of the building with an image of the planet Neptune in alignment with the sun.

“Use the pink to go from the purple back to blue,” Kater advised one of his colleagues.

Tens of thousands of people pass the mural every day, which delights Kater even as he paints.

“Still managing to stay anonymous. How funny is that, right? Being hidden in plain sight,” he said with a laugh.

One question that remains unanswered is whether he will actually be at the gallery show on Saturday — and if he is, whether he will be identifiable. It is Halloween, after all.