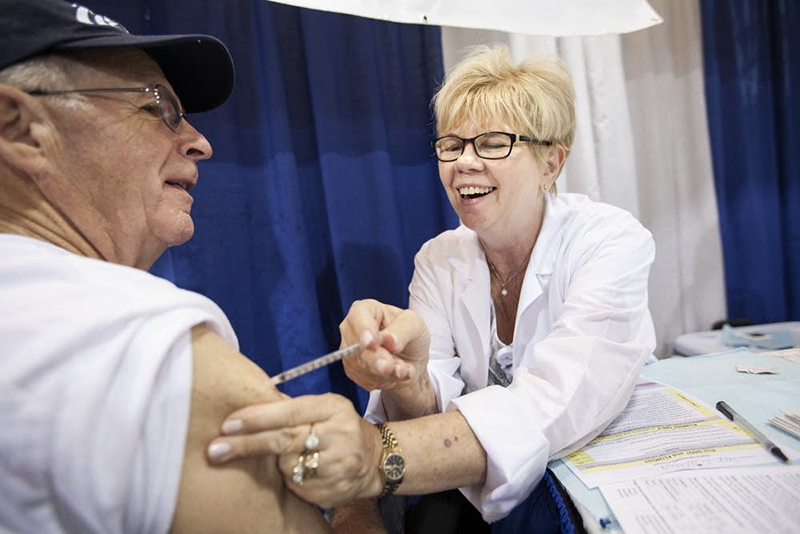 State officials are encouraging people not to delay getting their flu shots. Courtney Perry/MPR News

October marks the official start of flu season, and already sporadic cases are appearing in Minnesota.

Light flu activity is typical in October and does not necessarily signal an early start to the season. But health officials said flu cases can surge at any point, so people shouldn’t delay getting vaccinated.

The influenza that’s circulating in the Midwest right now is primarily a strain that’s harder on elderly people said Karen Martin, an epidemiologist at the Minnesota Department of Health.

“But it’s really too early to say what kind of season it’s going to be,” she added.

Those at a higher risk of flu complications include seniors over age 65, young children, pregnant women and people with chronic health conditions such as asthma, diabetes or heart disease.

Public health officials are concerned that vaccination rates could drop this year because the nasal mist form of the flu vaccine is not available.

In June, a U.S. Centers for Disease Control and Prevention advisory board discouraged health providers from using FluMist. The recommendation is based on government data showing the nasal mist offered poor or no protection against flu in recent seasons.

So, once again, shots are the only option.

“You know it’s too bad for those people who didn’t like injections that they’re not able to get the FluMist this year,” said Martin. “But we’re hoping that people understand that influenza is a serious disease and will continue to get vaccinated.”

Because flu vaccines are not 100 percent effective even in the best of circumstances, Martin said flu prevention strategies should always include good health habits.