Funeral services for Francis Leo Lair will be at 10 a.m. Saturday at St. Theodore Catholic Church. The Rev. Russell Scepaniak will officiate. Interment will be at St. Theodore Cemetery. Visitation will be from 5 to 7 p.m. Friday with a prayer service at 6:30 p.m. at Bayview/Freeborn Funeral Home and one hour prior to the service at the church. Online condolences are welcome at www.bayviewfuneral.com.

Precious husband, father, grandfather and great-grandfather, Francis Leo Lair of Albert Lea, most recently of Burnsville, left this world at the age of 97 on Sunday, Oct. 23, 2016, surrounded by loved ones. 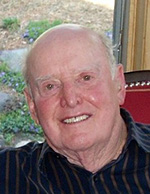 Francis will always be remembered for the Irish twinkle in his eye, his wit and wisdom, his respectful and polite ways, his leadership skills and his courage in the face of physical pain. He was passionate about his faith, his family, his friends and his business career.

Francis was born Oct. 12, 1919, in Freeborn County and was a graduate of Emmons High School. He was a proud patriot who served his country during World War II as an Army cryptographer for three and a half years in the Aleutian Islands.

He married his beloved wife, Dorothy, in 1949 and moved to Albert Lea, where they raised their family. Francis spent 42 years in farm and consumer cooperatives, serving in various capacities at National Cooperatives, where he became president and CEO in 1961. He remained in that position through a merger with Universal Cooperatives in 1972, relocated to Alliance, Ohio, followed by a return to Bloomington, where he retired from that position in 1982.

Francis’ dedication to his community and cooperatives throughout his professional life was significant. He was the first congregational president of St. Theodore’s Catholic Church, director of the Albert Lea Chamber of Commerce and Freeborn National Bank, was a member of the Knights of Columbus, American Legion, Veterans of Foreign Wars, Elks Club, Rotary Club, Board of Directors of the Minnesota State AAA, Directors Group Health — now Health Partners, and chairman of the Board MSI Insurance and Cooperative League of the USA, where he served as their international representative in Switzerland. Francis was inducted into the Cooperative Hall of Fame in Washington, D.C. in 2002.

He was preceded in death by his devoted wife of 65 years, Dorothy (Sullivan) Lair; parents Frank and Gert Lair; brother, Webster Lair; sisters Betty Martinson, Margie MacKay and Maxine Lair; as well as many sisters-in-law and brothers-in-law.

His family would like to extend a special thanks to his special nurse, Lindsey, and all of the caregivers at Emerald Crest Burnsville for their tender love and compassion during Francis’ residency there.