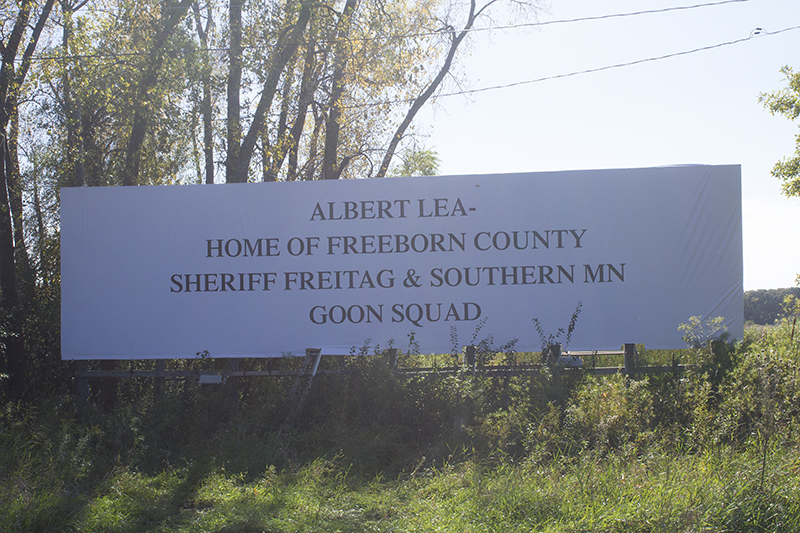 A sign posted near Walmart in Albert Lea appears to be related to a recent search of an Albert Lea man's business. — Sam Wilmes/Albert Lea Tribune

The Freeborn County sheriff claims a flier mailed out last week to area residents by an Albert Lea business owner was inaccurate and contained an unethical request.

The flier was sent out after search warrants were conducted Sept. 8 for Dima Corp., owned by Mal Prinzing, in Albert Lea, Mason City, St. Cloud and Rochester. The search warrant was conducted after law enforcement believed synthetic marijuana was being sold at the business.

Officers allegedly found a product containing a small amount of THC and invoices from distributors on the premises of the Albert Lea location at 400 W. Front St. No charges have been filed, though an investigation into the invoices was ongoing as of last week.

Freitag stated in a post on the Freeborn County Sheriff’s Office Facebook page Monday that Prinzing called him when the South Central Drug Task Force showed up at his business to execute the search warrant.

“Prinzing told me, ‘you’re the man. If anyone can stop this, you can. I need your help… get down here.’ To ask this of me, under those circumstances shows that corruption was on his mind,” Freitag said.

The sheriff claimed Prinzing was looking for special privileges from donations he gave to the Sheriff’s Office.

“Prinzing donated to my campaign and also to our K-9 program,” he said. “It’s apparent he believes that because he donated, he feels he has special privileges and the laws of the land applies to everyone, but him.”

Freitag said he gave three reasons why he would not go to Prinzing’s business. He said it is illegal for him or anyone else to interfere with a search warrant. He said it violates his integrity and that the Sheriff’s Office had nothing to do with the search warrant.

After Freitag’s response, Prinzing on Sept. 12 posted a digital sign on the side of the Front Street location that read, “Concerned voter asked where the (expletive) was Freitag?” The sign has was later changed to a different message, which also targeted Freitag.

Prinzing in his flier claimed Dima Corp. employees in Albert Lea were mistreated by law enforcement agents while they executed the search warrant.

“We still don’t know what these goon-like individuals were looking for,” Prinzing said. ”I called Sheriff Freitag during the raid, and he said he couldn’t help me … Kurt Freitag, of all people, should know I would not be involved nor would I employ anyone involved in illegal activities. I supported him in his run for office with hundreds of dollars, plus, plus, plus! As the chief law enforcement officer of the county, he knew or he should have known he could search any building, car or airplane I own, including my home, without a warrant or goons.”

Prinzing, who has owned Dima Corp. for 42 years, cited his service in World War II and his status as a longtime community business as evidence of the positive contributions he has made to the region.

Freitag took issue with the tone of Prinzing’s letter and his use of the word “clowns” and “misfit” to describe law enforcement officials.

“Prinzing is great at calling us names, like goons, clowns and whatever else, but he has no one to blame for his troubles but himself,” he said. “Shame on Prinzing for the ‘misfit’ comment and thank God we’re not all carbon copies of each other.”