October is Domestic Abuse Awareness Month.  It is a reminder for us moving into fall that although autumn is beautiful and bountiful, our sun is fading so the nights are longer and colder. The starkness of Minnesota winters brings about the isolation some fear from the bitter cold and storms. People have a tough time navigating the roads, sidewalks and often battle the severe winds, and at times our isolation is enhanced by the weather. Domestic abuse knows no divide of status, race or wealth. It affects all in our community, our workplaces, our schools, churches, and most of all, the families. 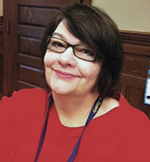 This can also can be a difficult time for victims of abuse, as often the key to the abuser is to have as much power and control over the victims as possible. The victims are frequently prevented from communicating with family member and friends. Abusers often also tend to control the money and every aspect of the finances, or convince a romantic partner to put their names on their accounts and homes along with access. A person with few, to no options, often goes back into that abusive relationship. Homelessness and affordable housing is a big problem for today, no matter if one has a job or not. It is extremely hard to be homeless, let alone with kids, and the only housing available is back with your abuser.

The facts are that the victim believes that their abuser loves them and that they are at fault for the abuse because that is what they are told relentlessly. If only they worked harder, were better at “making him happy,” didn’t “make him so mad,” were a better cook, a better mother and on and on. They are told they are worthless and no one else would love them. In the process they become accustomed to thinking they are unlovable. I know it hard to believe, but this is that person’s “normal.” It isn’t just reduced to a choice to stay or not to stay. And it generally doesn’t start with marriage. If someone punched you in the face the day you met, you most likely would never want to see them again. The insidiousness of domestic abuse is that is happens so gradually the victim is often unaware that this is not something they did, deserved or even recognize until they are deeply into it and it is dangerous.

Anger is an outburst that is generally short-lived and resolved. Abuse is calculating manipulation reinforced by power and control over others. The most dangerous time for people in these situations is when a person leaves their abuser, and they both know it. Once the abuser loses control, their anger grows exponentially  like “pulling out all the stops” acting out dangerous tantrums, escalating violent behavior, hurting the family and others, harming their pets or children. They often make threats to kill family members, take the children, to kill themselves and to take everyone with them,  hound them and stalk them until they relent and go back to make it all come to a stop. But it does not stop. It frequently picks up right where it left off.

Make no mistake, abuse goes both ways. We serve both men and women. Men often do not report abuse for many reasons: It is stigmatizing for them to report, and they were often traumatized as a child. Some abusive men find themselves in new very abusive relationships once his significant has left him with the tables turned against him. Women fall prey to the same type of men as they hope this time is better. Nobody can predict the future, and often they fall back into bad relationships like an old shoe.  They feel shamed by society, humiliated and are afraid to show people what they have been hiding so very long. People just want the same things we all want. Victims do not necessarily have a poor self-esteem. They learn to think less of themselves because of the most insecure person in the relationship, that of the abuser.

It takes our community to educate ourselves to these abuses, to not turn away and to make people responsible for their own behavior. The abuser will never get better if families and friends do not stand up and place boundaries on their behavior. Learn about the lifelong serious damage exposure to abuse does to their children and how to change these things that are so repugnant to our values and core beliefs. Help your friends, your family and teach your children that violence towards each other is simply not an acceptable way to resolve differences.

Please join us in remembrance of lives lost to domestic violence this past year and join us for our annual candlelight vigil taking place at New Denmark Park from 6 to 8 p.m.  Thursday. Coffee and refreshments afterward.