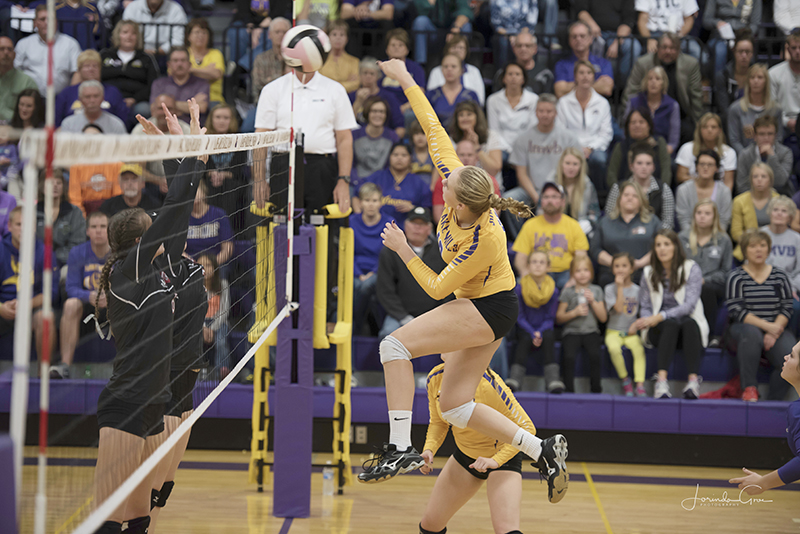 Lake Mills senior Lexi Groe goes up for a kill during the first set of Thursday’s regional semifinal against South Winnesheik. Groe finished the match with a team-high 13 kills. Lory Groe/For The albert lea tirbune

No matter how good a team is, the postseason is supposed to be a grind.

But not for the Lake Mills volleyball team.

The Bulldogs continued its dominance over their opponents Thursday night in a second-round playoff matchup with South Winnesheik.

“I thought we played very well,” Bulldogs coach Jim Boehmer said after his team’s 3-0 victory. “We raced out to an early lead in the first set, and that set the tone for the rest of the night.”

The Bulldogs didn’t allow more than 16 points in a set.

Their biggest challenge came in the third set. Tied at 10-10, the Bulldogs finished the set on a 15-2 run.

“I felt like we were in a battle,” Boehmer said. “But I saw something in the girls at that point in the match. They seemed to say ‘now it’s time to get going,’ and ended the match on a big run.”

Lexi Groe led the Bulldogs with 13 kills, and the Bulldogs had 30 kills on the night. Sydney Dahl and Dana Baumann had seven digs apiece. Hailey Borgmeyer had nine kills and five digs.

The Bulldogs’ defense was superb, coming up with 14 blocks on the night, led by Groe with four.

The Bulldogs will now make their ninth trip to the regional finals in school history, and their record sits at 41-0.

Its opponent has yet to be determined.