Funeral services for Mike Kalvig will be at 2 p.m. Saturday at First Lutheran Church in Glenville. The Rev. Nancy Hansen will officiate. Interment will be at Hillcrest Cemetery in Albert Lea. Visitation will be from 5 to 8 p.m. Friday at Bonnerup Funeral Service, 2210 E. Main St. in Albert Lea and again one hour prior to the service at church. 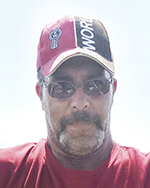 Mike was born on Oct.19, 1969, to parents Harold and Kate (Weis) Kalvig in Carmichael, California. They moved to Northwood when Mike was one-year-old and later moved to Glenville. Mike graduated from Glenville High School and married his high school sweetheart, Tammy Olson, on Oct. 21, 1989, at First Lutheran Church in Glenville. Together, they raised three wonderful children.

Over 25 years ago, Mike began his career driving truck. Fifteen years ago Mike and his dad started Double K Express. Mike’s children have fond memories of riding in the truck with their dad and having daily phone calls with him while he was over the road. Mike loved getting ready for demolition derbies and doing mechanical work with his hands. In his free time, he enjoyed going hunting and fishing. He will be remembered for his outstanding character and devoting his love and his time generously to his family.

He was preceded in death by his grandparents Hubert and Pat Weis.