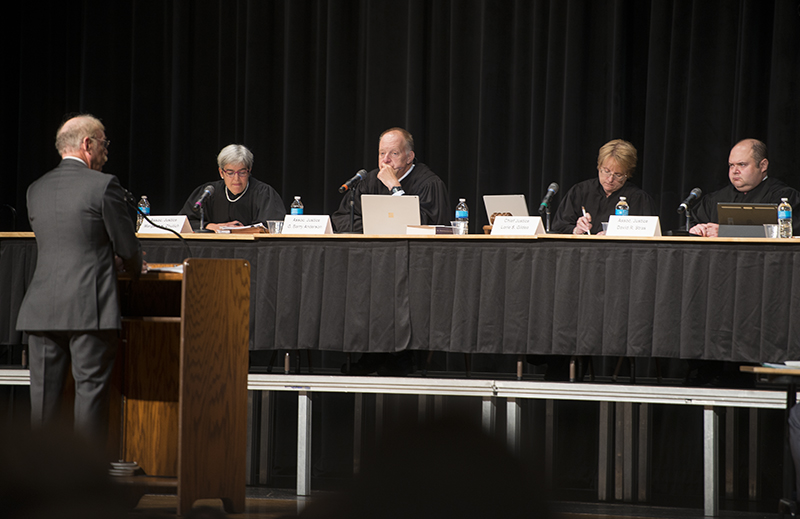 The Minnesota Supreme Court convened at Albert Lea High School Thursday as part of a biannual program that seeks to teach students about the court system and build the public’s trust and confidence in the judicial branch. Colleen Harrison/Albert Lea Tribune

Tenth- through 12th-graders listened to oral arguments pertaining to a case involving a lawsuit alleging pregnancy discrimination in the high school auditorium.

“It was actually very interesting,” she said. “I am into the law type of scene and I liked both sides of the argument and it’s going to be really hard for the judges to decide on a verdict.”

Ogunkanbi said she was glad she was chosen to be a student representative to guide justices around the school. 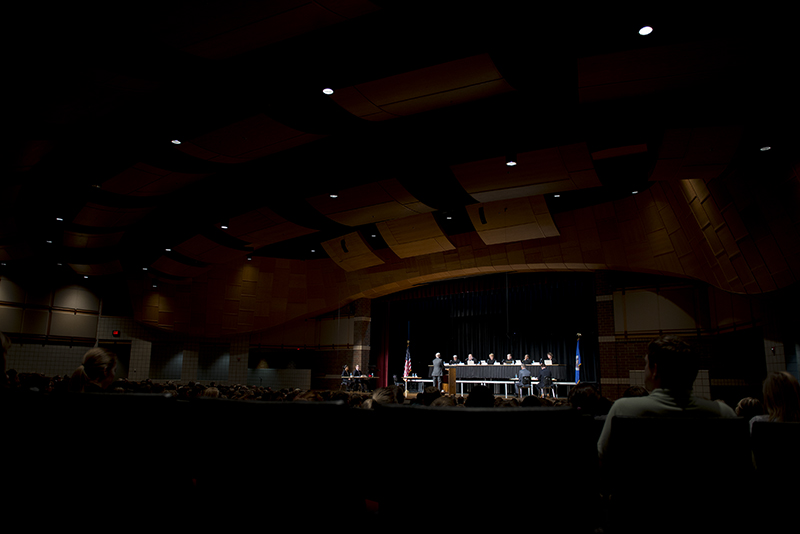 Angela Ross, a doctor at Family Orthodontics, reportedly informed LaPoint of the office’s policy of a maximum six-week maternity leave policy. LaPoint reportedly indicated she would consider a 10-week leave, before Ross withdrew the job offer. According to an information sheet, records indicate Ross was concerned about LaPoint’s failure to disclose her pregnancy during the interview and the impact a longer than six-week leave would have on the office.

The Minnesota Court of Appeals reversed a district court’s decision to rule in Family Orthodontics’ favor. The dental office then appealed the case to the Supreme Court.

The attorney for Family Orthodontics — Marshall Tanick, of Edina — argued to the justices Thursday that the dental office’s decision not to hire LaPoint was based on their concern over the length of time she would miss due to the pregnancy.

Family Orthodontics has a history of treating women well and allowing time off for paternity leave, Tanick said, noting the office offered paternity leave, although it was not required to do so because of its size.

Tanick claimed a 12-week leave of absence would have been “tremendously disruptive,” to the office and was a real and legitimate concern.

Supreme Court Justice Margaret Chutich questioned why the negotiation of the length of the pregnancy leave was not completed.

Pregnancy discrimination could include perpetuating stereotypes of pregnant women, Chutich said, such as denying employment based on concerns about missing work or morning sickness.

The lawyer for LaPoint — Stephen Smith, of Minneapolis  — claimed Ross did not follow through with her promise to evaluate LaPoint’s request, and urged the court to issue a summary judgment in LaPoint’s favor.

The court did not issue a summary judgment Thursday. A ruling on the case is expected in three to five months.

“We are so grateful to the Albert Lea community for the warm welcome we received and the excellent discussions we had about Minnesota’s court system,” Chief Justice Lorie Gildea said in a press release. “These community visits are such a great opportunity to be able to talk about the role our courts play in preserving our rights and freedoms, and engage students at a time they are learning about their role in our democracy. Minnesotans should be proud to have a court system that is recognized nationally for their fairness, accessibility and technological innovation.”

The event was the 44th in-school case oral argument for the Minnesota Supreme Court.

“It’s a once in a lifetime opportunity for most people in this town — particularly for these students,” Albert Lea High School social studies teacher Kurt Barickman said. “We have been working on this since May and it’s a lot of work and it was a great thing. Our kids behaved amazingly. I am so impressed by our students’ behavior. It is amazing.”