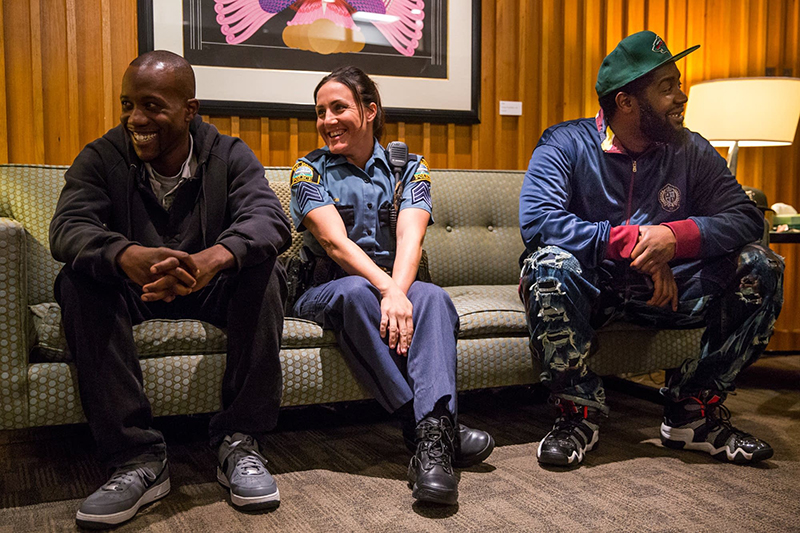 Derrick Sanders was never one to hang out with cops.

Far from it, actually.

The 31-year-old said his instinct was to run when a squad car pulled up.

He has a recent drug conviction, but Sanders’ fears stemmed from his East Side childhood when cops often stopped him, he said.

“I was just targeted; I wasn’t doing anything, just walking down the street,” Sanders said. “They thought I was in a gang but I wasn’t.”

After more than a dozen stops, he’d just run out of fear.

But things changed in the past couple of weeks.

Sanders and three other young black men spent a weekend in the nation’s capital with some St. Paul officers, visiting the newly opened National Museum of African American History and Culture.

The African-American men, all with criminal convictions — from selling marijuana to accidentally killing a friend — are a part of Circle of Peace Movement, which helped them turn their lives around.

For the officers and the men from Circle of Peace, the trip was a transformational experience, a chance to understand the roots of modern day racial tensions and conflicts that seem to surface daily between the police and people of color.

The museum laid out 400 years of black history — from the Middle Passage to the March on Washington to Michael Jordan.

“It was a range of emotions — from guilt to shame to sadness to laughter,” said St. Paul Deputy Chief Paul Iovino, “and just really understanding the true story of what the contributions of African-Americans have meant to this country and why it’s so much richer as a result.”

Iovino, who’s white, said the exhibits on the 1950s and ‘60s were especially revealing for a veteran cop and get to the heart of the tensions that persist to this day between police and communities of color.

Last year a contingent from the police department that included Iovino went to Selma, Ala., for the 50th anniversary of Selma’s “Bloody Sunday” March. Iovino said the trip was a follow-up to last year’s.

“It is about understanding the black experience and the African-American community and also what role law enforcement has played during some of those moments, and certainly during the civil rights movement,” he added.

Iovino organized the trip with the Circle of Peace Movement, a 6-year-old program that tries to — among other things — help bridge the gulf between police and African-Americans. Sanders and the three other men are part of the group.

It took a while to build trust, but officers eventually became regulars at the organization’s weekly discussions, said Circle of Peace Movement founder and community activist Russel Balenger.

“From the first day the Circle of Peace Movement met,” he said, “I started saying to the people in the room that we need to invite in the police and we needed a different relationship with the police.”

Six years later, the group decided to travel together to Washington. The St. Paul Police Department got a grant from the Bremer Trust to pay for the flight.

For everyone who went, the most emotional part was seeing artifacts recovered from a Portuguese slave ship that sank in 1794.

That exhibit, in particular, brought a new and visceral understanding of his ancestors’ suffering, Sanders said.

“Everybody was in tears,” he recalled. “There was a lady behind me in tears, I was telling her, ‘It’s all right,’ and then I started tearing up. “

Shannon Deidrick, a white officer with two years on the force, said it was eye opening.

“All the horrific stories, all the chains — seeing all this untold history that you weren’t really told about in history class, I don’t think there are any words that can express those moments you experience going through that museum,” Deidrick said.

The group also visited the National Law Enforcement Officers Memorial, which lists the more than 20,000 officers who died on the job since 1791.

For 21-year-old Joseph Martin, another African-American man who went on the trip, learning about police who made the ultimate sacrifice was also a profound experience.

“Seeing all those names,” he said, “you have no choice but to understand that everybody’s a human being so knowing that they leave their house, they can get killed in the line of duty.”

The group went to the memorial on a quest: They looked for the 32 St. Paul officers honored there including James Sackett, a white policeman ambushed in 1970. Two men with ties to black militants were convicted of his murder just a decade ago.

Visiting the African-American museum and the police memorial was enlightening for everybody, said Randy Axtell, a second-year officer and the son of St. Paul Police Chief Todd Axtell.

Axtell said the trip has changed the way he approaches his job, giving him a greater sense of empathy for everyone in the community he took an oath to serve.

“We had an opportunity,” he added, “for both sides to have a perspective on where we came from and the struggles we deal with today and have dealt with in the past in our lives and history.”

Iovino said members of both groups will continue to build their newfound relationships at Circle of Peace meetings. He also referred to the trip as “the first annual.”

The trip changed hearts and minds, Iovino said, adding, “we hope to duplicate it many, many times.”