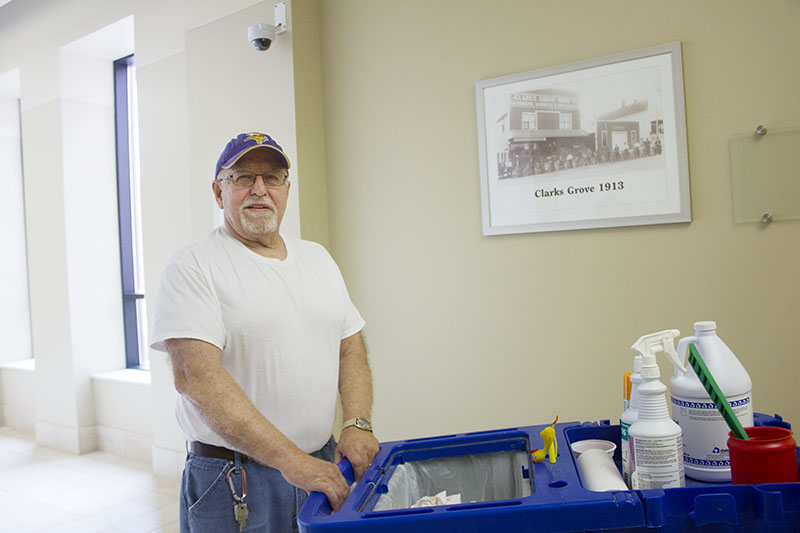 A local man has followed the Albert Lea wrestling program for more than five decades.

David Olson, 72, said though he enjoys watching different sports, high school wrestling is his passion, and he attends each varsity meet and tournament.

“It’s just interesting,” he said. “And of course I wrestled. I just kind of grew up with it. Albert Lea has had some (expletive) good teams, good individual wrestlers. We have had a lot of champions. I just love going to the meets, matches. I just love watching them.”

Olson, who has followed Albert Lea wrestling since 1962, said the community should take pride in its wrestling program.

“It not only shows you sportsmanship, but it also shows you value in their lives, and it shows sportsmanship, it shows leadership and it is a good physical activity — it keeps you physically active, and just the excitement and joy you get out of wrestling,” he said.

Olson is confident the Tigers will continue their success after finishing as Big Nine Conference champions last year.

“We’re going to be right in there,” he said. “We will probably take the Big Nine again.”

Olson, an Albert Lea High School graduate, is a part-time custodian at the Freeborn County Government Center. Olson was a stacker at Albert Lea Freezer — now Minnesota Freezer Warehouse Co. — for more than 40 years before retiring and becoming a custodian about 10 years ago.

Olson will be recognized for his 10 years of employment with Freeborn County Nov. 4.

“I predict they do,” Olson said. “Now, if they win it, I don’t know, but I predict they are going to make it if everyone stays healthy, which I think is going to happen.”

The Vikings have soared to the top of the NFC North with a 5-0 record, despite losing former MVP Adrian Peterson and starting quarterback Teddy Bridgewater.

Olson said his favorite Minnesota team is the Twins. He remembers following the team since its inaugural season in Minnesota in 1961, and the era’s stars, such as slugger and Major League Baseball Hall-of-Famer Harmon Killebrew.

“I am glad they are from Minnesota, and I am proud of them,” he said. “All of the players — I enjoy watching them.”

Sports is a lifelong passion for Olson.

“I always loved sports,” he said. “I just grew up with it, and it’s just something that interests me.”

Olson and his wife, Darla, have 10 children, 28 grandchildren and three great-grandchildren.

Olson was a drummer for 30 years in rock ’n’ roll bands The Delrays, from 1962-72, and Arlen and Ole Two-Piece Band from 1973-93. His favorite band is Creedence Clearwater Revival, and his favorite singer is the band’s former lead singer, John Fogerty.

“There’s five things I love in life: my wife, my kids, my grandkids, my great-grandkids and rock ’n’roll,” he said.

Family: wife, Darla; 10 children between the two of them; 28 grandchildren; and three great-grandchildren

Interesting fact: Olson was a drummer in two bands