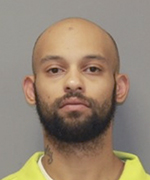 At about 10:45 p.m. an Albert Lea Police Department officer initiated a traffic stop near the intersection of James Avenue and Fourth Street for a vehicle registration violation, according to police.

The driver reportedly then accelerated and fled through several area streets at speeds of up to 60 mph.

Horton reportedly could not navigate a bend in the road on Virginia Place, resulting in the vehicle going over a curb and resting partially in a yard.

the K-9 search reportedly noticed a door partially ajar on an unattached garage in the 300 block of East Seventh Street about one block from where the vehicle crashed. The K-9 reportedly strongly alerted at the entry door, and Horton was found and taken into custody.

No injuries were reported from the chase.