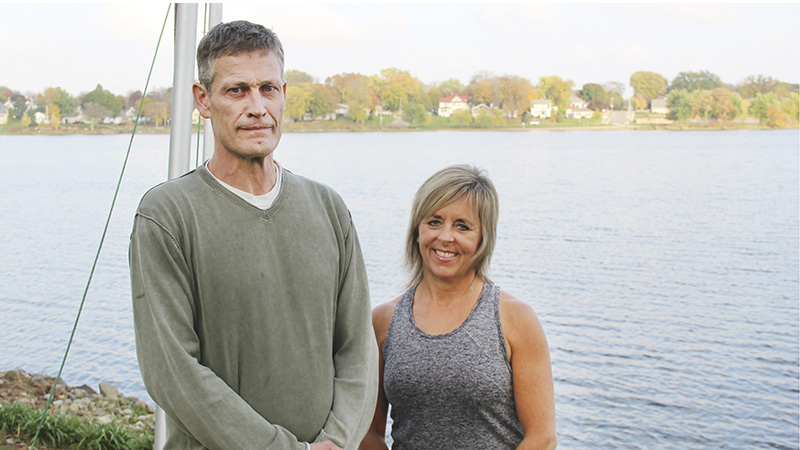 Kris Springborg was out on Fountain Lake Oct. 9 when his sailboat tipped over and he fell into the lake. He was unable to get himself to shore, but was later rescued by Jackie Carstens who was alerted to his cries for help and paddled out to him on her kayak. Sarah Stultz/Albert Lea Tribune

An angel in a kayak.

That’s how Albert Lean Kris Springborg will forever remember the woman who saved his life earlier this month after his sailboat capsized on Fountain Lake.

Springborg said if it weren’t for kayaker Jackie Carstens of Albert Lea, who came to his rescue Oct. 9, he may not be where he is today.

Springborg suffered from hypothermia and said by the time Carstens had arrived to pull him to shore, he could not feel his limbs.

The 54-year-old man said he had set sail on the lake right after 5 p.m. that day. It had been a nice day, so he had
hoped to get out on the water one last time before putting the boat away.

Some time later — it is unsure exactly what time — Springborg said he went to adjust part of the boat, when a strong gust of wind tipped him and the boat into the lake.

It had happened to him before when it wasn’t so cold, but this time he couldn’t get the boat back upright. The mast was stuck to the bottom of the lake.

Springborg said he was in the middle of the lake and figured the best thing he could do was start swimming to shore toward houses near Mayo Clinic Health System in Albert Lea and call out for help in hopes that someone would hear him. 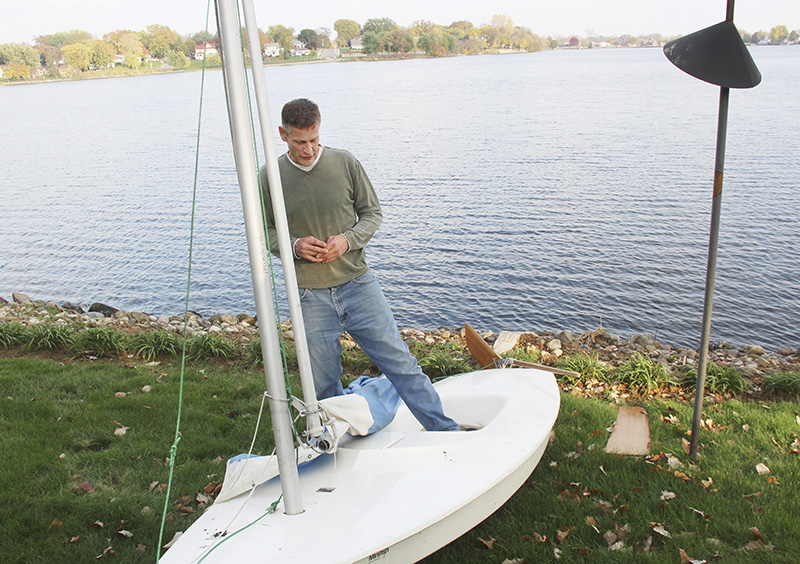 Albert Lean Kris Springborg looks at his sailboat in the backyard of a home on East Park Avenue where it was taken after he capsized Oct. 9. Sarah Stultz/Albert Lea Tribune

With cooler weather approaching, many people had already put their boats away for winter, so he said he was afraid no one would be around to see him.

He had an old life jacket on that went around his neck and hangs down in the front.

“Soon I couldn’t move my arms or legs,” he said. “I was calling out for help, but I knew no one was out and no one could hear me.”

He said he called out for help until he felt his voice give out.

“It makes it so your lungs tighten right up,” Springborg said. “It’s like breathing from a tiny little straw.”

Across Fountain Lake, Albert Lea residents Bob and Krista Steffl and their children were walking around the lake near Lakewood Avenue and North Shore Avenue.

Bob Steffl said he remembers his wife pointing out that a man was on a sailboat in the water, and then after walking a little bit further, they looked over and saw that the boat had turned over and the man was in the lake.

Steffl said right away he tried to call 911, but his cellphone died. His wife had not brought her phone with them.

Steffl estimated that within a half a minute, nearby resident Jackie Carstens showed up, asking what was going on and if she should get her kayak and go rescue the man.

He said he and his wife, a former lifeguard, cautioned Carstens to be careful that the man didn’t tip her over.

“Knowing how a person who’s panicked like that can react in the water, it was a potentially dangerous situation for her, and she didn’t hesitate. She just went for it,” Steffl said.

Carstens said she had taken lifeguard training as well in the past and knew she was going to have to hold on and make sure Springborg didn’t grab and pull her in.

She had been out kayaking earlier in the day and has a dock space near her home on Giles Place. She said she was alerted that Springborg was in the water after hearing the Steffls nearby.

With a rush of adrenaline, Carstens began paddling toward the sailboat but then shortly after realized that Springborg was not as close to the boat as she thought.

Carstens helped Springborg get ahold of her kayak, and she brought him back to shore, where first responders and a police officer were waiting. There the first responders took over, and he was taken into the emergency room where he was treated for hypothermia.

“When the rescue people took over, I didn’t see her again,” he said.

Carstens, a social worker through hospice, said she was glad to be there at the right time and to be able to offer help.

Springborg had tears in his eyes as he thanked Carstens during an interview at the Tribune.

“Without you, it probably would have been no one who could have been able to get there in time,” his mother, Barb Springborg, said.

Albert Lea Deputy Fire Chief Jeff Laskowske said Fountain Lake is  a spring-fed lake, and because of that, it typically stays cooler. He did not have an estimate on the temperature of the water that day, but he said it doesn’t take long for the body’s core temperature to drop.

“We’re getting to that time of year when temperatures are getting cooler,” Laskowske said. “It doesn’t have to be zero or below zero to cause hypothermia.”

He advised people to be cautious of this.