Ronald William Norton, Sr., the son of Perry and Nettie Norton, was born January 15, 1932, in Webster City, Iowa. He was raised and educated in the area of his birth.

On Sept. 30, 1952, Bill was united in marriage with Linda F. Frakes in Baltimore, Maryland. 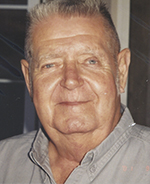 Bill served in United States Navy during the Korean War entering on May 4, 1951, and was honorably discharged on April 25, 1957.

They returned to Eagle Grove after his military service and Bill drove truck for Ellsworth Truck Lines and Umthun Trucking, retiring in 1985.

Bill was a member of United Methodist Church and the Veterans of Foreign Wars, where he had served as commander. He enjoyed his Canadian fishing trips and the many winters spent in Texas.

He was preceded in death by his parents; brother, Howard Norton; wife, Linda, in 1998 and special friend, Maureen Stiehl of Albert Lea in 2016.

Memorials may be left to the discretion of the family.