Rose Marie “Rosie” Pederson passed away Monday, Oct. 10, 2016, at her home in Montello, Wisconsin, at the age of 75. Rosie was born Feb. 27, 1941, in Albert Lea to parents Lawrence and Mary Cunningham. She was raised in the Hartland and Geneva areas, graduating from Ellendale High School. Rosie was a member of All Saints Catholic Church in New Richland. 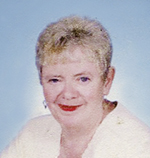 For many years Rosie was a cook, working at various Albert Lea restaurants including Trumbles and Trail’s Travel Center. She was a member of the Does (Elks) in Albert Lea. She had been living in Wisconsin for the past 10 years.

Survivors include her sons and their wives “Chip” and Suzi Pederson of Hartland, Jeff and Janice Pederson of Ellendale, Richard “Dick” and Anita Pederson of San Gabriel, California, and Tony Pederson of Minnesota Lake; 10 grandchildren; 14 great-grandchildren and one on the way; brothers Larry (Shirley) Cunningham of Oregon, Thomas Cunningham of South Bend, Indiana, and Martin (Patti) Cunningham of Minneapolis; sisters Margaret Murphy of Albert Lea, Kathleen Chagnavich of California and Ellen (Dan) Margetich; sister-in-law, Carol Cunningham, of Iowa; as well as many nieces and nephews.

A private service for Rosie’s family will be held. Interment will be in St. Aiden’s Cemetery in Bath Township. Memorials are preferred to a charity of the donor’s choice.