Funeral services for Ruth “Dolly” E. Levisen of Albert Lea will be at 11 a.m. Tuesday at Trinity Lutheran Church in Albert Lea. The Rev. Eileen Woyen will officiate. Visitation will be from 4 to 7 p.m. Monday at Bonnerup Funeral Service and one hour prior to the service at the church. Interment will be in Graceland Cemetery.

Dolly was born Jan. 12, 1931, in Albert Lea, the daughter of Olavus and Valborg (Aflangrud) Aspenson. She graduated from Albert Lea High School in 1949 and on March 17, 1951, she was united in marriage to Paul R. Levisen at First Lutheran Church in Albert Lea. 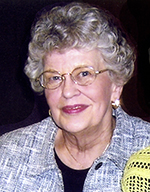 Dolly was an active member of Trinity Lutheran Church and a member of the church circle. She enjoyed being a homemaker and taking care of the family, cooking, baking and keeping the house “neat as a pin.” There were many trips to Diamond Jo, vacations in Texas and her trip to Denmark with her husband, Paul — but she mostly loved the time spent with family and friends over coffee. Dolly and Paul also enjoyed working at their Malt and Footlong stand at the Freeborn County Fair.

Her family gives a special thank you to Thorne Crest staff and Mayo Hospice for their loving care of Dolly.