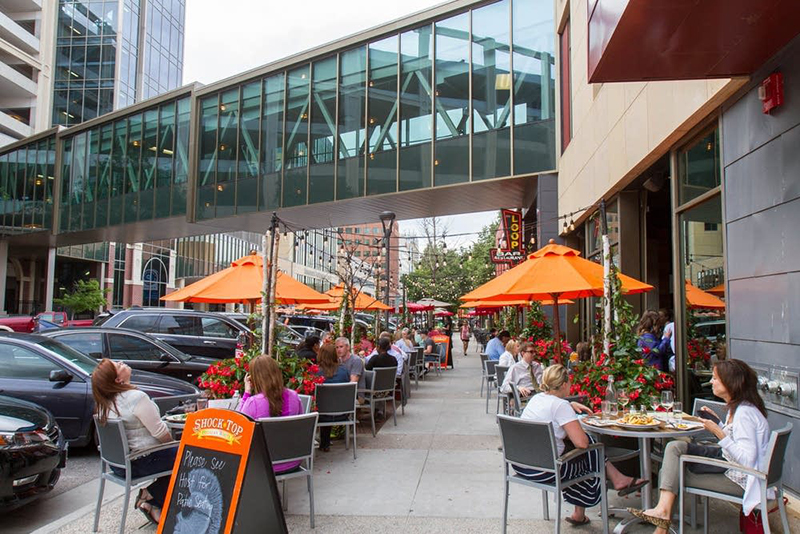 Rochester is expected to grow with new developments surrounding the Mayo Clinic, and short-term rental properties are on the rise already. Pictured, diners sit at sidewalk tables in downtown Rochester in July 2015. - Alex Kolyer/For MPR News

Rochester’s Kutzky Park is a middle-class neighborhood with tree-lined streets and historic homes. But at some addresses, turnover is on the rise. Properties are being advertised as short-term rentals on websites like Airbnb.

“There’s a woman down the street who is moving to California. She’s keeping her house, and she said she’s going to do six-month deals on Airbnb,” said neighborhood association president Jesse Welsh.

With more than 3 million visitors a year, Rochester has an abundance of hotel rooms. But short-term rentals that offer all the comforts of home are a relatively new phenomenon.

They’re just one facet of the real estate speculation fueled by the Destination Medical Center, a massive economic development project that’s meant to bring even more patients and top talent to Rochester and Mayo Clinic. Welsh is ambivalent about renting neighborhood homes to visitors.

“They have a kitchen and a living room and a place for their family to support them. In that aspect, it’s really good,” she said. “I think the thing that’s a little concerning is that you’re seeing more and more houses being bought and rented out. It’s just changing the nature of the neighborhood.”

Renters, whether short- or long-term, just don’t have much of a stake in the community, Welsh said.

But their numbers are likely to keep growing. The Rochester Convention and Visitors Bureau estimates there are already more than 100 short-term rentals here. The visitors bureau also says it routinely hears that they are unwanted competition for the regulated lodging options in town, some of which operate under a special medical lodging license administered by the county.

The rise of online rentals has jumpstarted a policy debate that’s playing out in much bigger cities: how to balance the interests of existing, regulated businesses against those operating in the unregulated sharing economy.

“We are trying to be responsive and cognizant of some of those businesses that already exist in Rochester that provide those sort of services,” said City Council President Randy Staver. At the same time, he said, the city needs to give visitors the options they want.

Staver said he expects the City Council to discuss the issue soon. But some city leaders say it’s already taken too long.

Big debates around car-sharing services, like Uber, continue to play out in city council meetings.

“Simple things that other communities have figured out like food trucks, breweries, Airbnb, Uber, we don’t have policies in place that effectively address these,” said Rochester Council Member Michael Wojcik. “And when we do put policies in place, they tend to be protectionist towards existing businesses, which is probably not a good business model for the city of Rochester.”

Council President Staver says Rochester has to put a priority on safety in a way many other cities don’t.

“Many of the visitors to Rochester are in a vulnerable state in terms of medical care,” he said. It’s perhaps even more at the forefront of our thinking that people are safe as they visit our city.”

University of Minnesota design expert Tom Fisher says getting this question right is crucial to realizing the Destination Medical Center vision. Millennials make up roughly 40 percent of the workforce. Fisher, who sits on a DMC board, said cities cannot afford to ignore what millennials want and value, even if it means shaking up the local economy. Fisher said communities will struggle economically if they fail to embrace the sharing economy.

“It sends a message that this a community that isn’t open to new ideas, that is not open to growth, that it’s not open to younger people, which is a devastating message to send if you’re trying to thrive as a community,” he said.