Tigers come up a point short 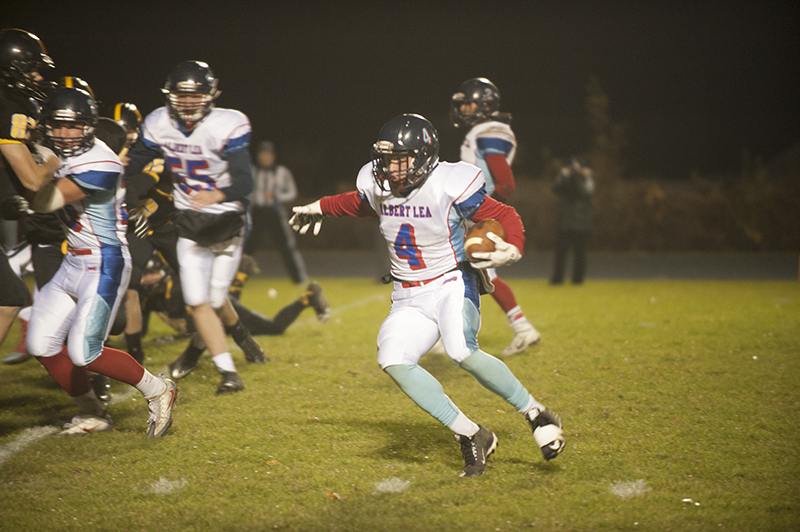 The Howard Lake-Waverly-Winsted Lakers football team won one regular season game in 2015 and ended up making it to the state tournament, thanks to a great run in the playoffs.

The Albert Lea Tigers were hoping to be that team this Tuesday night.

Having played better football over the last month, the Tigers kicked off their postseason by traveling to Byron to take on the Bears.

Faced with windy weather and rain in the second half, the Tigers gave the Bears all they could handle.

The game was filled with ups and downs, but most playoff football is like that.

The Tigers had a chance to win the game, twice, but missed on both opportunities in the closing minutes.

“This was the most complete football game Albert Lea has played in the last three years,” said Tigers coach Corey Black. “They played with heart and belief that we could win. We just came up short.”

The Tigers defense held serve on the opening possession, and then quarterback Sam Chalmers, along with running backs Jessie Hernandez and Dylan Lestrud, engineered a drive down the field that took up most of the first quarter.

It ended by Chalmers finding wide receiver Jack Buendorf for a 15-yard touchdown late in the quarter.

The two teams then traded possessions for the next two quarters.

Albert Lea had a 7-0 lead at halftime, and kept Byron off the scoreboard until midway through the third quarter when the Bears got a 44-yard run from Caden Blazing to set up a 1-yard touchdown run on the next play.

The Bears would strike again on the first play of the fourth quarter when Blazing took the handoff and bounced it out to the right, getting the edge on several Tiger defenders and beating everyone to the end zone for a 31-yard touchdown.

Then, things got interesting.

Chalmers was picked off when he was looking for Josh Forde on a fourth-down play with 6:55.

The Bears had the chance to run a significant amount of time off the clock, but chose to pass the ball. 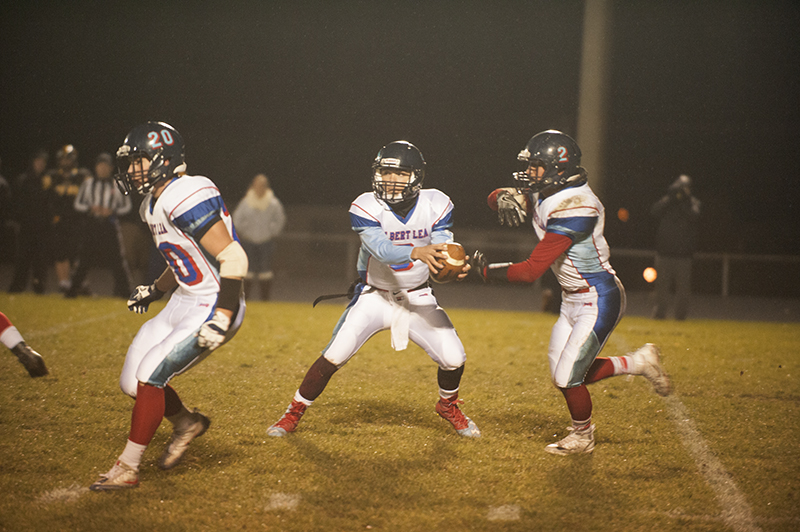 Albert Lea quarterback Sam Chalmers tries to decide whether to keep the ball or hand it off to running back Jessie Hernandez in the first half Tuesday night’s game.

It was extremely difficult to throw the ball into a whipping rain and wind. The end result was a Bears punt, which they fumbled the snap. The punter had no choice but to fall on the ball, giving the Tigers the ball on the 15-yard line of the Bears.

However, the Tigers had a difficult time as well. Chalmers fumbled a shotgun snap, and before they knew it, they were faced with a third-and-25. The Tigers managed to get some yards back on third down, leaving them with a fourth-and-10 from the original line of scrimmage.

Chalmers dropped back and floated a pass over the middle. Buendorf swooped in and made a sliding catch in the end zone.

The Tigers were on the verge of tying the game.

But Black didn’t want to take his chances. He wanted to go for the win, on the road, in the playoffs. It made since because, if successful, the Bears would have to travel into the wind with the certainty of making a field goal being close to zero percent.

Chalmers handed the ball off to Hernandez, but he was stuffed at the line of scrimmage.

And the Bears would hand the Tigers another opportunity.

The Bears were driving, but it was third down-and-7. For some reason, with time winding down on the game clock, the Bears attempted a pass over the middle.  Sean Brownlow was right there to pick it off at the 35-yard line.

Now the Tigers had 65 yards to go in less than a minute, but still they had a chance.

With no timeouts, the Tigers had to gain significant yardage in short. On the first play, Chalmers dropped back and threw the ball down the middle of the field. Several players from both team converged on the ball, but it was Byron who came up with the big play to make the interception.

“We were unable to execute when it mattered most,” Black said. “However, we dominated both sides of the ball. This senior class has set the new standard of confidence and desire to win that all classes should and will follow from this point out. This is just the first step.”