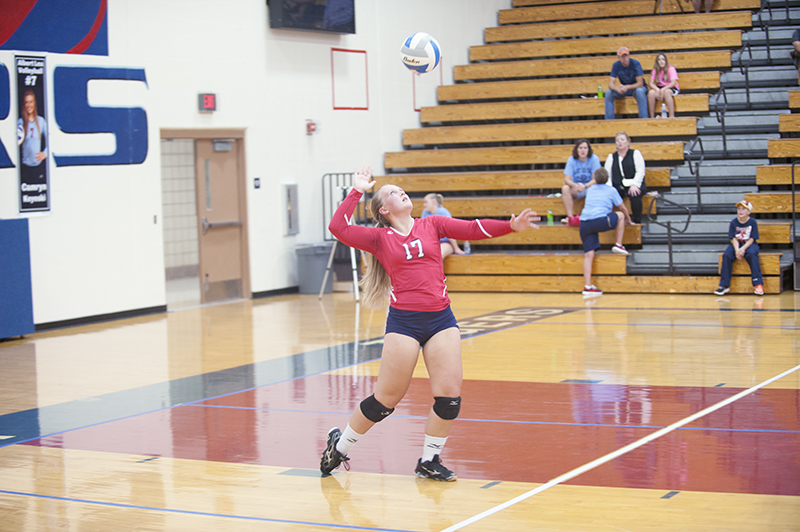 Albert Lea libero Bethany Tennis throws up the ball to during a serve in a recent match at Albert Lea High School. Jarrod Peterson/Albert Lea Tribune

The Albert Lea volleyball team competed in a tournament in Apple Valley over the weekend and managed to take fourth placeout of 16 teams.

“We played well against some very tough teams,” said Tigers coach Cathy Baumann. “Other than some unforced errors in our match against (Minneota), we did a really good job of playing strong on both offense and defense.”

The Tigers took on Minneapolis Patrick Henry in their first match of the tournament Friday. The Tigers easily dispatched the Patriots, winning 25-10 and 25-11.

Albert Lea faced some stiffer competition in their second match against Legacy Christian Academy. Still, the Tigers did enough to win the match 25-21 and 25-13.

That put the Tigers in good position for Saturday’s action, which had them face Minneota in their first match of the day.

The Tigers lost two hard-fought matches 22-25 and 16-25 to send them into the third-place game against the Waconia Wildcats.

The Tigers played the Wildcats tough, but lost two close matches 20-25 and 20-25 to finish in fourth place.

Despite losing two matches on Saturday, Baumann saw a lot of improvement in the passing game.

“Our passing has been much improved throughout the week,” Baumann said. “That has allowed us to put up some great kill options. We also aren’t allowing teams to go on runs against us and we are showing more control on the court.”

Albert Lea will have its final home and regular season match Tuesday against Northfield.

Start time is scheduled for 7 p.m.