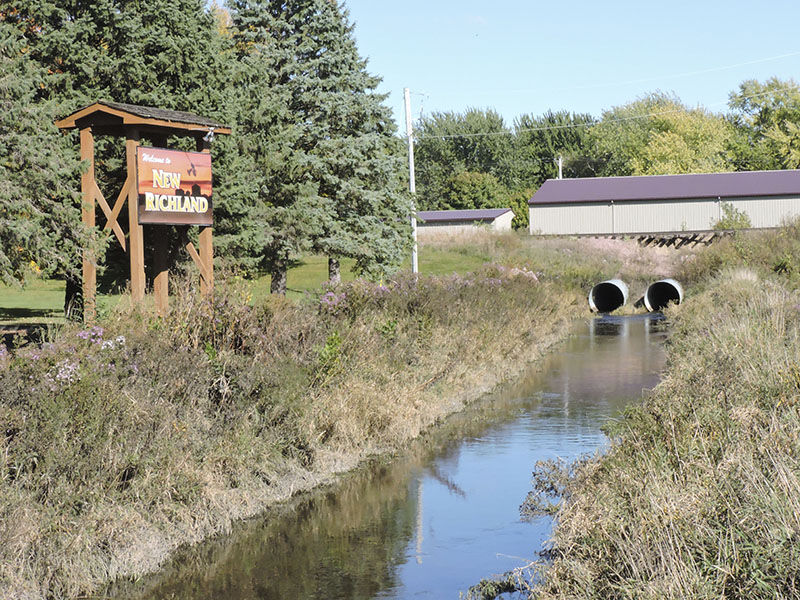 The culverts running through New Richland couldn't keep up with the amount of water running through them after the Sept. 21 and Sept. 22 storms. The drainage ditch swelled with water until it spilled into the neighboring park and began affecting nearby businesses. The rain had receeded considerably by Oct. 1. Kelly Wassenberg/Albert Lea Tribune

NEW RICHLAND — Stormwater, surface water, sump pump failure, sanitary sewer back up. There is a host of reasons why so many of the town’s residents experienced flooding issues in their homes Sept. 21 and Sept. 22, but they all go back to one thing, about 9 inches of rain.

According to Wayne Billing, New Richland’s treasurer and clerk, the bulk of the flooding happened to homes that run along Minnesota Highway 13 where there is a drainage tunnel that runs through the town through a culvert. He listed the reasons above as potential exact causes for the flooding, yet said that you could have two houses right next to each other experience flooding for different reasons.

What makes the whole ordeal more frustrating for some residents is that some of the homes that experienced flooding in 2010 were spared this go-around and problems were scattered throughout the city.

Dave Wildgrube, who lives by the drainage ditch, said water spilled in through his basement windows during the last flood. This time he ran to get a pump at 3 a.m. to empty water that seeped through the walls and came up his basement floor drains. He lost a couple major appliances in the flooding of his unfinished basement because of about 18 inches of water.

He knows some residents that had as much as 3 to 4 feet in theirs, including one neighbor with a finished basement. Wildgrube said the couple lost their washer and dryer, water heater, furnace and a freezer chest filled with meat that actually floated on the surface of the water before flipping over. He reported the neighbor’s problem was the sanitary sewer lines that had the toilet in the basement backing up.

These are significant concerns for Waseca County Emergency Operations Director Nancy Lageson, who said that’s it’s been a challenge to compute just how many homes have been affected by the flooding. She said many residents proceed with trying to clean up and replace lost items on their own after insurance tells them they are not covered. She fears that by trying to get through the winter with damaged furnaces or not properly cleaning up after a sanitary sewer backup will compromise the safety of some residents.

There will be a multi-agency resource center set up from 1 to 7 p.m. today and Friday at Waseca Central School for the thousands of people affected by the flooding in Waseca County, which includes New Richland.

The American Red Cross will be there with cleanup kits, and other agencies will be on hand that could provide relief for residents, if not now, in the future, should funding become available, Lageson said. She noted some funding is available now to help in the replacement of furnaces, but all funding is given based upon need assessments.

Businesses in New Richland seemed to have been spared the burdens of the previous storm.

In 2010, the New Richland Care Center was evacuated and forced to close for three months due to about 4 inches of water that spilled into the facility. Care Center Administrator Don Alexander said things were much different this time. While the center’s 44 residents were moved to facilities in neighboring communities such as Albert Lea, Waseca and Blooming Prairie, the only cleanup necessary was the mud and muck dragged into the facility due to the sandbagging efforts.

The residents were moved back into the facility Monday and Tuesday after the floors were cleaned and items that had been stacked on beds to protect them from potential water damage were returned to their original location.

Whether you speak to residents like Wildgrube or business owners like Morgan, the consensus seems to be that the problem is unfortunately bound to happen again. They feel the ditches and culverts meant to channel the water away from the area are too heavily burdened by a heavy rain.