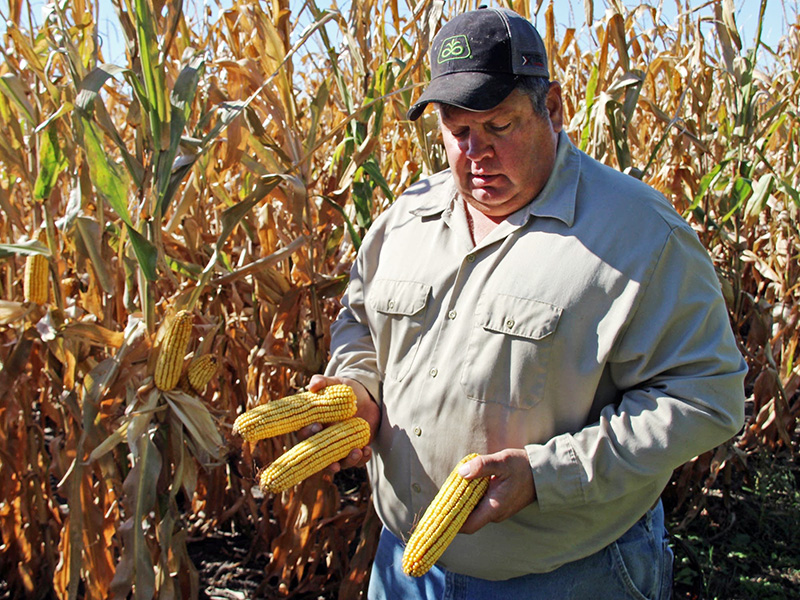 On his farm southeast of Mankato, Farm Bureau President Kevin Paap explains that every third row of corn in his fields is sold far away from the U.S. -Mark Zdechlik/MPR News

As much as a third of the corn on Kevin Paap’s farm southeast of Mankato won’t be sticking around long after the harvest. It’s headed for sale across the globe.

World trade is vital to his and other Midwest farms. Markets for Minnesota farmers have quadrupled in the 22 years since the North American Free Trade Agreement took effect, he said. That’s why he’s more than a little concerned that NAFTA and a proposed Asia-Pacific trade deal have been taking such a beating recently in the presidential race.

“Ninety-five percent of our customers don’t live here in the United States,” said Paap, president of the Minnesota Farm Bureau, the state’s largest agricultural association. “They want our products. We want to get them to them.”

Anti-trade deal rhetoric may play well this year in industrial states crucial to Republican candidate Donald Trump and Democratic contender Hillary Clinton. But in Minnesota where agriculture and other businesses have generally benefited from lower tariffs and the easing of rules to let goods move across borders, the tough talk cultivates worry.

“We have to have trade in agriculture,” said Paap. “Whether it was NAFTA, whether it’s Trans-Pacific Partnership, we’ve got to be able to trade with the rest of the world.”

“There will be a giant sucking sound going south,” Perot famously said during a debate as he said high paying U.S. jobs would go to Mexico where labor costs are cheaper.

Bill Clinton won the election and signed NAFTA into law at the end of his first year in the White House. Trump’s tried to use that support to jab Hillary Clinton in this year’s race, calling the deal “one of the worst things that ever happened to the manufacturing industry.”

Trump’s accused U.S. trade negotiators of incompetence and said he’d renegotiate trade deals and strictly enforce them to keep America from getting ripped off. He’s also swiped at the proposed Trans-Pacific Partnership, designed to reduce trade barriers between North American countries and several across the Pacific including Japan, Vietnam Australia and New Zealand.

Clinton, who once called the Trans-Pacific Partnership the “gold standard in trade agreements,” now says she opposes the deal, breaking with President Barack Obama, who has said it would help U.S. small businesses, manufacturers and farmers. Clinton says she supports global trade provided it does not harm American workers and has proposed a special trade prosecutor to enforce agreements.

“We haven’t had this kind of very serious high-profile discussion of trade for quite a long time now,” said University of Minnesota economics professor Robert Kudrle.

The problem is that even though a country benefits overall from trade, trade often hurts pockets of workers in specific industries, Kudrle said. So blaming trade for economic problems is an easy campaign trail sell, he added.

“Populism has never seen trade as other than with suspicion, whether it’s on the left or the right,” he said. “It’s difficult for many people to understand that even if one country is better at doing everything than another, both can benefit from trading with each other. Even if we can make clothing much more efficiently than it can be made elsewhere in the world, we might still benefit from importing clothing and having our workers go into areas in which we have an even greater advantage over the rest of the world.”

Kudrle calls the decline of the textile, apparel and furniture industries in the South and other regions of the U.S. “one of the big, sad stories of the last 10 or 15 years. “They’ve just been completely wiped out, mainly from China, and with a devastating effect on local communities. That’s something which clearly in retrospect we should have done more about but we didn’t.”

Americans appear to be torn on whether international trade and trade deals are good are bad for the U.S. A Bloomberg poll released last spring found nearly two out of three Americans want more restrictions on imports.

Paap believes cooler heads will prevail when the election is finally over.

Kudrle believes the focus should be on helping Americans who get hurt in trade deals, not punishing other countries that want to sell things here. The tariffs Trump has proposed would trigger trade wars, he added, which would hurt many more Americans than are hurting now under trade deals.

“It would be disastrous. It’s true that agriculture and processed foods are at the top of Minnesota exports,” Kudrle said. “They would be damaged. But all of our sophisticated manufacturers, all of our software, all of our high-tech, all of that, would be put in jeopardy.”