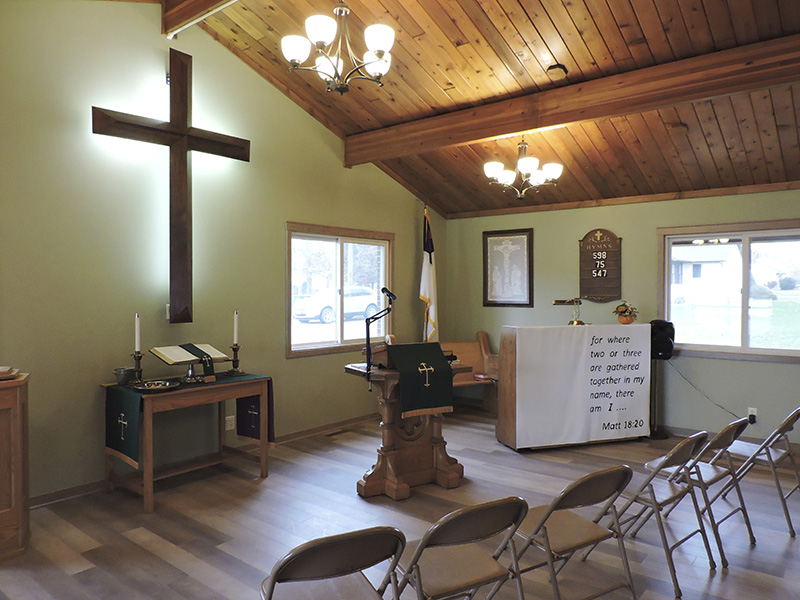 The cross, piano and the original pulpit were a few of the items transferred to the new United Methodist Church site in Alden. - Kelly Wassenberg/Albert Lea Tribune 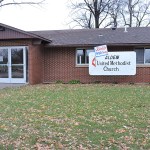 The former dentist office in Alden was cheaper to buy and remodel than it would have cost for the United Methodist Church to make its old church handicap accessible. – Kelly Wassenberg/Albert Lea Tribune 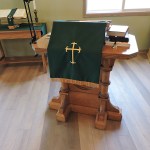 The pulpit now being used at UMC dates back to 1890. – Kelly Wassenberg/Albert Lea Tribune 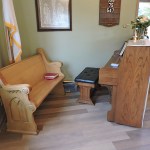 A pew was modified from the old UMC building specifically to provide a place for the pastor and pianist to sit. – Kelly Wassenberg/Albert Lea Tribune 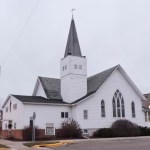 The old United Methodist Church in Alden was demolished and has been replaced with a parking lot for the Alden-Conger School, which is adjacent to the property. – Kelly Wassenberg/Albert Lea Tribune 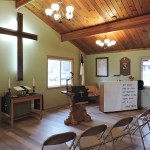 The cross, piano and the original pulpit were a few of the items transferred to the new United Methodist Church site in Alden. – Kelly Wassenberg/Albert Lea Tribune

ALDEN — For many people of faith, church is meant to be a warm and inviting place to worship their religion. That feeling or warmth can diminish rather quickly when you cannot walk beyond your church’s entryway.

Linda Bryson and Barb Zeller, two trustees of United Methodist Church in Alden, said it was a difficult to witness parishioners struggle each week to ascend the flight of stairs that led to the church’s sanctuary. In fact, there were times that the service took place in the entryway lobby so every member of their small, aging congregation could participate in the service.

Both women wanted to find a solution to the problem, yet renovating the 1890 church to be handicap accessible would be expensive. To meet code, the building would have to install an elevator that could access each of the church’s four levels and would have to renovate the bathrooms, as well. Even if the funds could be secured to pay for such modifications, other problems would remain.

According to Zeller, both the size and lack of insulation in the building had parishioners leaving their coats and gloves on throughout services during the winter. The roof of the building was also a concern, with Bryson estimating the price tag of fixing it at $30,000.

A remedy was needed to aid the ailing church, and Zeller would find it while serving as a member of the Alden Area Development Corp. Retired Alden dentist Steven Poeschl had came to one of the group’s meetings in spring 2014. The man noted his efforts to bring a new dentist into his former office had not panned out and asked if anyone know of someone who might be interested in his single-story building.

Poeschl and Bryson give Zeller much of the credit for what would happen in the months to follow. After measuring the building and realizing the space would be adequate for the needs of the church’s congregation, Zeller went to the church council with an idea. Instead of bringing handicap accessibility to the church, maybe they should bring the church to a handicap accessible building.

The council entertained the idea, which would be soon put before members of the congregation. Concerns were vocalized by some, yet the votes members cast were overwhelmingly in favor of relocation.

As a long-term member of the church, Zeller understood the conflict between one’s heart and head. Zeller was baptized, confirmed and married by the pastor at United Methodist and felt a connection to the building too, but she felt accessibility was more important.

“The church is made up of people, not a building,” she said.

It was only after the congregation approved the transition that Poeschl was made aware of what Zeller had planned for his building.

According to Zeller, Poeschl’s response was an emotional one. On the edge of tears, he said that his second love was dentistry, his first was God — and he couldn’t be happier that the office he built to serve his second love, would be transformed into a house of worship for his first.

Many of the items not taken to the new church site have found new homes. The church’s organ was donated to two churches that will utilize its parts. The original 1980 pulpit was repaired to be used at the new site, while the larger pulpit that the church had been using was donated to St. John’s Lutheran Community in Albert Lea — where the daughter of the carpenter who constructed the piece now resides. Some of the stained glass was traded off in exchange for helping the church salvage other pieces that are now being kept in storage. Bryson and Zeller note the church hopes to utilize the glass in the future.

The church bell is also in storage and may eventually make it’s way out to the front of the church with new signage once an upcoming construction project on Minnesota Highway 109 is completed.

Smaller items such as Bibles and collection plates were symbolically gathered by parishioners who met one last time in their old church’s entryway. At the beginning of the Ascension Sunday service, everyone in attendance then carried an item a short distance down the street into the new church. Weekly services have taken place at the new facility ever since.

Zeller’s idea may have been the catalyst that began the relocation project, yet it took the time and talent of many people to make it a reality.

Zeller looks back with pride at the work that has been done over the last two years and so does Bryson.

“A man who goes to our church told me, ‘I woke up today and knew I could go to church because I didn’t have to go up those stairs,’” Bryson said. “That comment made it all worthwhile.”