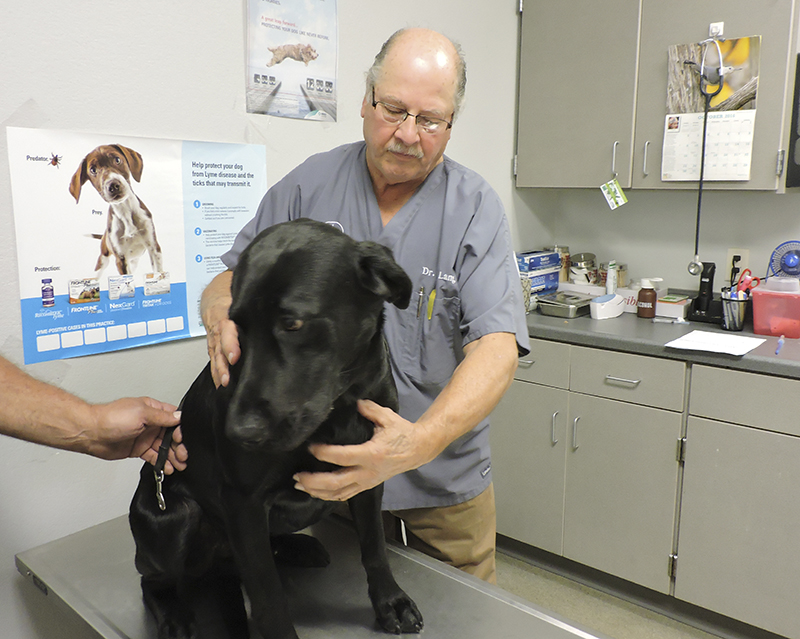 Finnegan, a purebred lab, was brought into see veterinarian Tom Lang at the clinic in Clarks Grove by his owner Doug Brown of Austin. Kelly Wassenberg/Albert Lea Tribune

CLARKS GROVE — Five decades have passed since Tom Lang began working as a veterinarian in Clarks Grove, and while he’s witnessed many changes in his field during that time, he has no immediate plans of hanging up his hat anytime soon.

“He will never retire,” she said with a laugh, noting that in his entire career she has never heard him complain.

Lang’s career began in 1966. He had returned to Clarks Grove after graduating from the Minnesota College of Veterinary Medicine and worked beside fellow veterinarian Earl Thompson.

Lang said back then most of the work they did was out of a truck, running from one farm to another. Sometimes they would go on as many as 30 calls a day and there weren’t really any set hours to his business. Most calls were situations where immediate treatment was needed, and it wouldn’t wait for the morning. Oftentimes, he would return from one call just to find his wife or children had taken another call in his absence and would head right back out the door.

At the time, 90 percent of his business was related to food animal production, cows, swine and even horses. The other 10 percent dealt with small animals such as family pets.

That trend has reversed over time as many farmers have begun to maintain their own herds. Lang still does consultation work for the hog industry as one of his principal roles at the clinic. He now runs blood tests for diagnostics, sets up vaccination schedules and herd health protocols, but never gives injections when he’s on site, he said.

The public’s increased devotion to family pets has also played a part in that trend and now accounts for 75 percent of the work he does. In the beginning, financial constraints often limited the amount of work he received. Pets were most frequently brought in only in cases of emergency and he would often be told that if it would cost more than $25, he could just put the animal down.

Lang said his career is more rewarding now that preventative care and health maintenance has become a greater priority, and pet owners are willing to invest more into a pet if their life can be saved.

Technology has made things much easier as well. Lang said when he first began as a veterinarian, blood drawn from animals would have to be taken to a human hospital for diagnostics if they would be willing to do it. X-rays even had to be taken to Naeve Hospital to be developed before they had microscopes for blood work and dip tanks to develop their own films. Today, the clinic can do an entire blood chemistry workup in 20 minutes.

His schedule is more predictable now and his wife, Linda, no longer refers to his phone as his mistress, but she does still expect him to take every call he receives from a pet owner.

It’s something he encourages.

Lang said it doesn’t cost anything to call and talk to someone at the clinic. He would much rather clients call in rather than try to diagnose an issue themselves. Not only does it allow them to consult on whether an issue can wait or not, it also allow the clinic to document issues the animal has had in the past. It also can make treatment much easier as the clinic always has a veterinarian on call, but if a problem with a pet during the day turns into an emergency at night, they will not have extra staff available to treat the animal.

Lang is not just a veterinarian. He is one of the partners who own Clarks Grove-Waseca Veterinary Clinics. Each location has four veterinarians and a number of support staff.

The Clarks Grove site is a full service facility that includes an equine hospital.