EDEN PRAIRIE — Kyle Rudolph split wide to the left and was matched up against Giants cornerback Trevin Wade.

As the Minnesota Vikings tight end ran a slant into the end zone, Wade was all over him. But in his short time in Minnesota, quarterback Sam Bradford has quickly learned that even when Rudolph is covered, it doesn’t mean he’s not open. 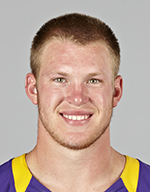 The 6-foot-6 Rudolph shielded the 5-foot-10 Wade behind him, giving Bradford a big target for what proved to be a much easier scoring pass than it probably should have been. The two have formed a fast connection, and Rudolph is exhibiting the difference-making skills that have occasionally been masked by injuries.

Rudolph has 19 catches for 221 yards and three touchdowns, tied for the NFL lead among tight ends. He has caught a TD in each of the three games quarterbacked by Bradford, who was acquired just over a week before the regular season opener to take the place of the injured Teddy Bridgewater.

“It shows the confidence that Sam has in me to throw balls in those tight windows when guys are draped on my back or in close proximity,” Rudolph said after a 24-10 victory over the New York Giants on Monday night improved the Vikings to 4-0. “If he has the confidence to throw it to me in those situations I have to come down with the ball. I take pride in catching it in those situations.”

Rudolph has already been targeted 33 times this season, making him one of the featured elements of the Vikings passing game along with receiver Stefon Diggs, who also has 33 targets.

“He’s really good at being physical, especially through the catch,” Bradford said. “So I think there’s times, even though a guy might be in good position, Kyle can use his body to come away with the catch.

Rudolph was drafted in the second round in 2011. The Vikings were so tantalized by his size, speed and hands that they took him despite a severe hamstring injury that cut short his junior season at Notre Dame.

By the time his second season was over, he was emerging as a force. He caught 53 passes, including nine TDs, and was named MVP of the Pro Bowl after the 2012 season. But injuries limited him to 17 games total in 2013 and 2014.

He was able to play in all 16 games last year with Bridgewater, hauling in 49 passes for a career-high 495 yards and five TDs. Those numbers could have been even better had the Vikings not needed him to spend so much time blocking to help a beleaguered offensive line. This year, they have turned him loose a little more often, and they have needed to on an offense that is missing All-Pro running back Adrian Peterson while still working Bradford fully into the mix.

Coach Mike Zimmer called what Bradford has done with Rudolph “throwing him open.”

“I thought he’s made some really good catches in tight quarters,” Zimmer said Wednesday. “There’s the one third down play where the ball was a little low the other day and he made a nice catch on that. Kyle’s got good hands and they’re developing a good rapport.”

A big start to the season only got bigger this week when Rudolph and his wife Jordan welcomed twin girls to the family. He had hoped to catch two touchdown passes in the game against the Giants, one for each of them.

“I guess they’ll have to learn to share,” Rudolph said. “That’s their first lesson.”