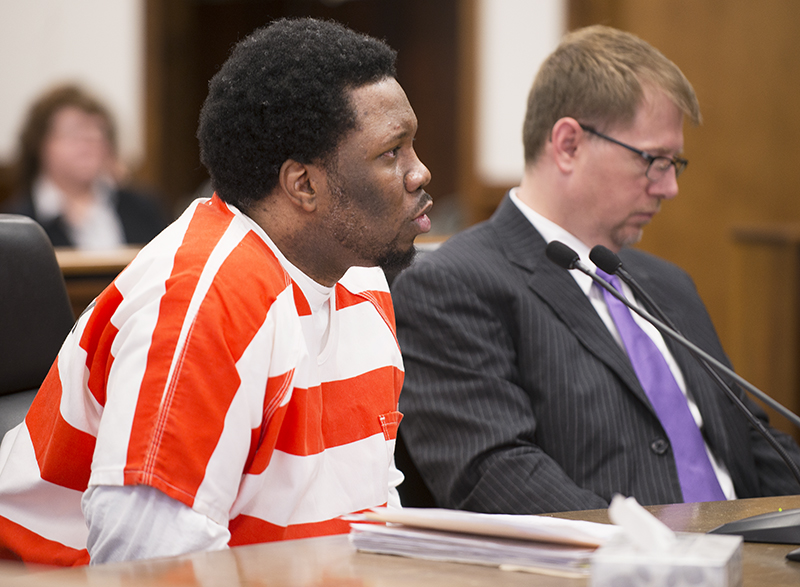 Tyrone Washington Jr. listens as he is sentenced to life in prison without the possibility of parole on Oct. 30, 2015, at Worth County Courthouse for the Aug. 15, 2013, stabbing death of Justina Smith in Northwood. - Colleen Harrison/Albert Lea Tribune

A Northwood man has lost his appeal of a first-degree murder conviction.

During his trial testimony Washington claimed Smith, a Northwood resident he had been romantically involved with that summer, pulled a knife on him in the park and he grabbed it from her and acted in self-defense.

Washington testified he fell on top of Smith during the struggle, and she was stabbed as a result.

A Webster County jury found him guilty of first-degree murder. He is now serving life in prison without the possibility of parole.

Washington claimed there was insufficient evidence to support a first-degree murder conviction. He also stated the district court abused its discretion in denying his motion for a new trial.

The Iowa Court of Appeals ruled Wednesday that considering 12 sharp-force injuries Smith sustained and her two stab wounds — both of which may have been fatal — the jury could have reasonably concluded Washington intended to physically harm her.

The ruling also disputed Washington’s self-defense claim, noting he was not wounded and Tyrone Jones, the man who accompanied Smith to the park to meet Washington, testified he never saw her holding a knife and had no knowledge of her owning one.

Washington claimed his trial attorney, Charles Kenville, failed to object to admission of evidence of Washington’s being violent toward Smith — choking her and slamming her down on a bed — a month before her death.

The appeals court ruled evidence of Washington’s past violence toward Smith was admissible because there’s a logical connection between a defendant’s intent at the time of the crime and prior acts of violence toward the victim.

Washington is black. The trial was moved to Webster County due to concerns over the low number of black Worth County residents for a jury pool.

Washington’s trial first began in May 2015 in Fort Dodge, but was halted during jury selection after Judge Colleen Weiland dismissed the entire jury pool because 111 of the 112 potential jurors identified themselves as white. One juror identified himself as Native American.

The trial was rescheduled for July 2015. This time Weiland rejected a defense motion to strike the jury pool due to lack of diversity.

Four people on the jury panel of 224 individuals identified themselves as black. One of them was chosen for the jury.

In his appeal Washington challenged Weiland’s denial of his motion to strike the second jury panel.

In its ruling the appeals court noted Webster County census data indicated black people make up 4.1 percent of the population. The percentage of black people on the jury panel was 1.8 percent.

The court ruled this was not a substantial deviation from the overall percentage of black people in the county, and that they were not being systematically excluded from the jury panel.