Where they stand: Local House candidates 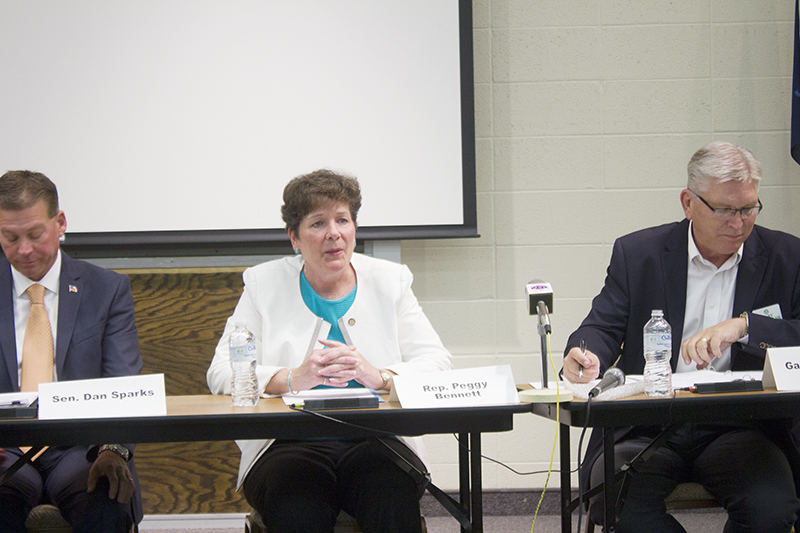 District 27A Rep. Peggy Bennett outlned her vision of government funding transportation, education and caring for individuals who cannot care for themselves Tuesday during a candidate forum at Riverland Community College. — Sam Wilmes/Albert Lea Tribune

The two candidates for District 27A representative on Tuesday shared differing views on ways to alleviate a deficit in transportation funding during a forum at Riverland Community College.

District 27A Rep. Peggy Bennett, R-Albert Lea, said a majority of constituents she has talked to do not support tax increases, and she claimed having a state surplus means the state should find other ways to fund transportation.

Bennett said she supports re-prioritizing taxes on car parts and batteries toward transportation.

Freeborn County has a $6 million yearly transportation funding deficit. Though the county has addressed the deficit with the passage of a wheelage tax in 2013 and a half percent sales tax in August 2015, county officials have said a deficit still remains.

More than 100 miles of paved Freeborn County highways in the next 10 years will be in need of funding, and officials have claimed some roads are in danger of returning to gravel if funding levels do not increase.

Schindler said there is a divide in the region on a possible gas tax, noting his belief that a comprehensive transportation plan is needed.

He said he supports funding transportation through measures such as bonding for transportation projects or through a sales tax on tires, car repairs or auto parts. 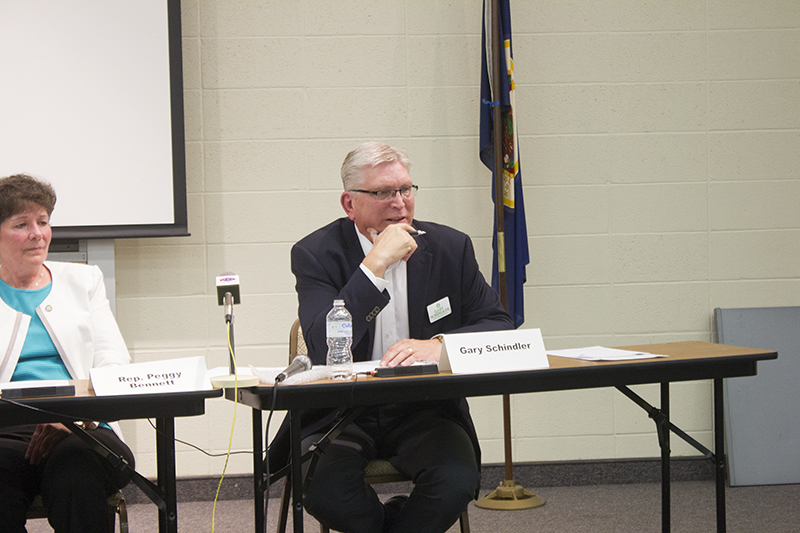 “I think we can reform regulation and that type of thing, so that we can get to the basic need,” she said.

Federal and state emergency management officials this week are in Freeborn County to evaluate damage. Federal funding is still possible.

Bennett described the flooding as a “great tragedy,” and spoke of grants she was able to help pass to address flood prevention.

“It’s an issue,” she said. “I think things are working well, but we need to continue on the same path that we have.”

Schindler said strategies, such as leveraging federal money and using flood mitigation grants need to be used to address flooding.

“We need some planning,” he said. “We need to study flood-prone areas and work with the city and the county to direct resources.”

Bennett and Schindler discussed Mnsure, Minnesota’s individual health care market, which was described as in “an emergency situation” earlier this month.

After a major insurer’s exit from the market earlier this year, the state scrambled to convince the seven remaining companies to continue offering plans to those residents who aren’t covered by an employer or through a public program.

Bennett said legislative efforts to enact tax relief and address other issues with the program at the federal level have been mostly blocked.

She said there is more than $1 billion in waste and fraud per year in MNsure.

Schindler spoke against commercials that have targeted him on MNsure.

“It does need reform, I am not a blind supporter,” he said.

Long delays and mistakes at the state level have clouded the rollout of MNsure, Schindler said.

He suggested tax credits, allowing small groups and individuals to pool to reduce costs and lower the cost of prescription drugs to address MNsure’s issues.

“It is nice hearing them,” he said. “It is nice to see people engaging and running.”

Samudio, who is supporting Schindler and Sparks, said the candidates seemed authentic.

“Nobody seemed to be hedging their answers,” he said. “They were very honest and sincere about their answers. I like that.”