Where they stand: Local Senate candidates 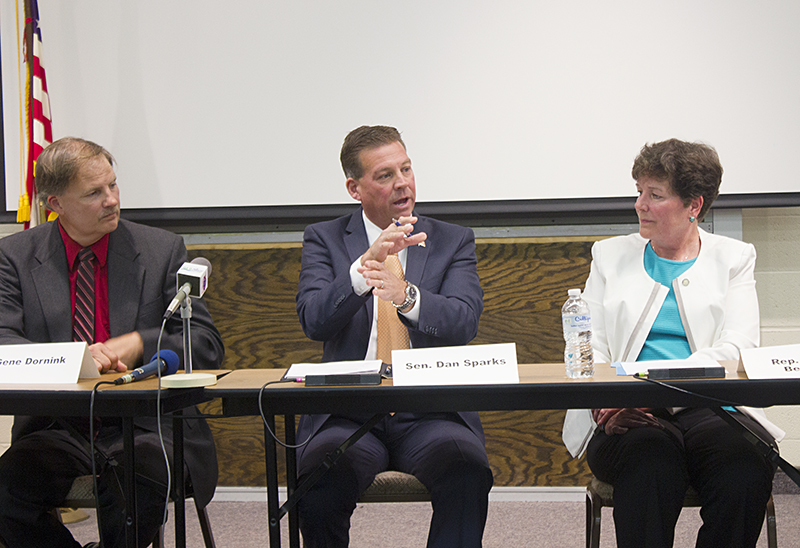 The two candidates for District 27 senator presented a stark contrast on why they should be elected during a candidate forum Tuesday at Riverland Community College.

District 27 Sen. Dan Sparks, DFL-Austin, said rural Minnesota needs an experienced leader with a track record of working with both parties in helping to secure broadband grants, passing a large agriculture bill and securing $7.5 million in bonding for the Shell Rock River Watershed District in 2005 to dredge Fountain Lake.

Candidate Gene Dornink framed the race as a career politician versus a working class individual, and cited his background as a farmer, carpenter and union member as proof of his working-class background.

Dornink said if elected, he will serve, sacrifice and budget at the Legislature.

“I definitely think we can use this at the Capitol,” he said.

He said he will be the voice for those who feel overtaxed and overregulated.

“I’m part of that stirring,” he said.

The role of the government is to create the environment for the private sector to create jobs, Dornink said. He suggested reducing taxes and regulations to draw business to the region.

“It’s more attractive in Iowa and Wisconsin,” Dornink said. “The atmosphere here is not as attractive to business, so they do not come.”

Sparks cited his work in a business development infrastructure program and an update to a workforce housing grant program passed in 2015.

He said the update, which did not pass in this year’s legislative session, will help more Greater Minnesota cities secure workforce housing, an issue he cited as a critical component of filling Albert Lea’s workforce shortage.

The bill would incentivize investors and developers to build middle-income housing in Greater Minnesota communities where there is a shortage, he said. Under the proposal, investors would receive a 40 percent state tax credit for contributions made toward eligible workforce rental housing.

Sparks committed to continuing to fight for the update to the bill and for tax relief for businesses, farmers and other groups in a tax bill, which also did not pass this year.

A $1 billion-plus package of public works projects and a major transportation funding bill — a top priority for the last two years — both failed to pass this year.

The Legislature should have passed the bonding bill this year in a special session, Sparks said.

He committed to fighting for local projects to be included in the bonding bill.

Dornink said a bonding bill is important so infrastructure projects, such as the Riverland Community College project, can be funded.

“These are all important,” he said.

“We definitely have a crisis here,” Dornink said. He suggested accountability, responsibility and transparency to prevent fraud and waste in the program.

Sparks said Minnesota is a leader in health insurance, but faces problems with the cost of prescription drugs and an aging population.

He said though premium increases have been limited to 5 percent of the state population, it still needs to be addressed.

“If you are one of those 5 percent … that’s unacceptable,” he said.

More competition is needed in the region, Sparks said.

“The debate provided a clear contrast contrast between people like Dornink and Bennett who believe in lower taxes and less government, or Sparks and Schindler, who believe more taxes, more spending and more regulations are the solution,” he said.