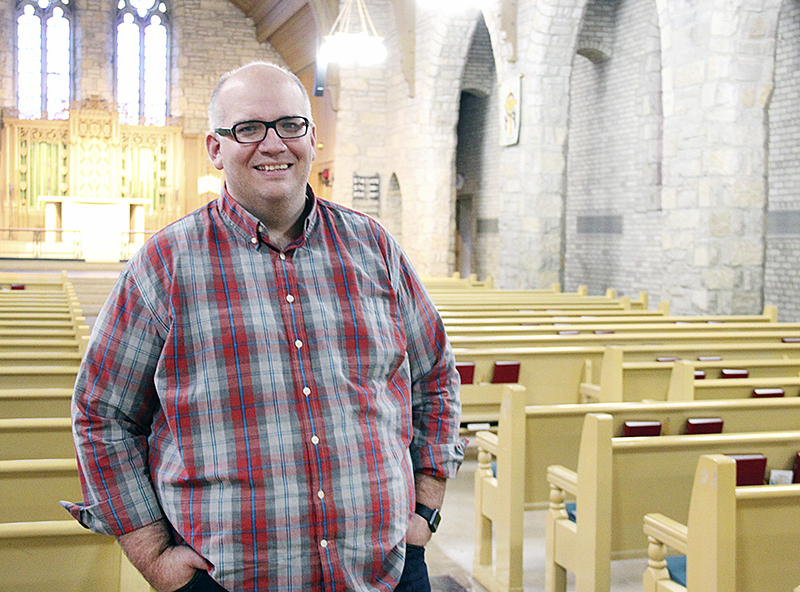 The new pastor at Grace Lutheran Church is hoping to expand the church’s role in the community.

Shane Koepke started in the role about six weeks ago after moving to Albert Lea from Iowa.

Koepke said he grew up in Emerson, Nebraska, a community of 800 people across the border from Sioux City, Iowa.

He started out as a social worker before switching careers and attending Wartburg Theological Seminary in Dubuque, Iowa.

When people ask him what inspired him to switch careers, he said he jokes that he hated the paperwork involved with social work.

In reality, he said he thinks ministry is a good way for him to involve his faith with social causes.

After graduating from the Lutheran seminary, he and his family moved 10 miles down the road, where he became pastor at congregations in St. Donatus and La Motte, Iowa, for the past nine years.

After that, Koepke said he and his wife decided they were both ready to pursue a new opportunity, and he opened himself up to a new pastoral call. His wife, Janelle, has a background in nonprofit fundraising.

“I had opened myself up to all of Minnesota and parts of Iowa,” he said. “Albert Lea was the most thorough and seemed to fit the best out of all the churches I’ve looked at.”

He fills the shoes of Janet White, who served as interim pastor following the departure of Todd Walsh, who is now chaplain at Thorne Crest Senior Living Community.

He said though it has been a new experience going from churches with 20 and 70 people to a church with a regular attendance of about 300 people, he has enjoyed meeting all of the families and members of the community.

“It’s beautiful,” Koepke said. “Everybody’s welcoming. I joke that everybody from the trash company to our neighbors to people on the street — everybody’s been welcoming.”

Looking into the future, Koepke said he and the church leaders plan to explore how Grace Lutheran can play a bigger part in the neighborhood — whether it’s young families with children, people at risk or others.

“I tend not to think of church as this one part set apart from the world, but it’s a place within the world,” he said.