A lesson in overcoming obstacles 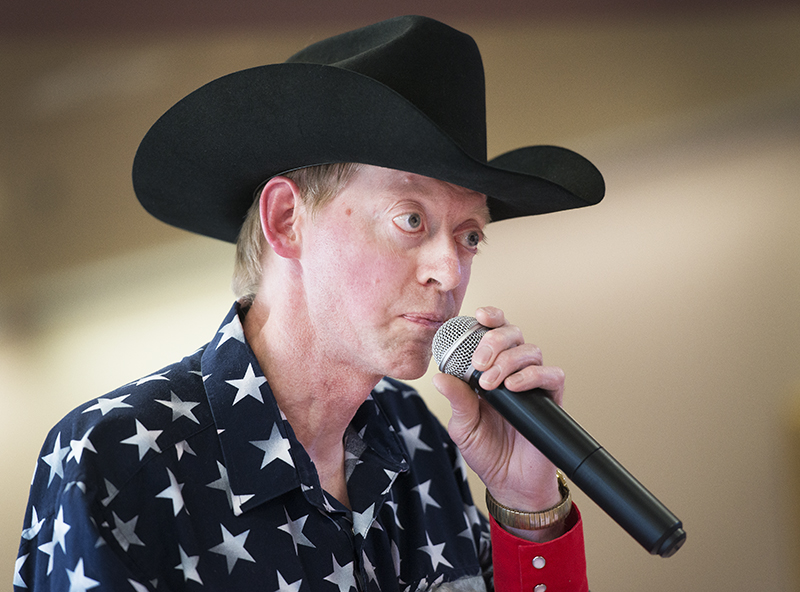 A dull, static hiss can be heard throughout a dining hall as people start to file in. Once everyone is seated, introductions are made, and eventually the hiss turns into music. A microphone switches on, and a man’s voice accompanies the instrumentals.

The man singing is Dunnell Lenort, during a Veterans Day show at Good Samaritan Society of Albert Lea.

Lenort, 55, has been musical for as long as he can remember. He said his mother caught him with a spoon in hand, pretending it was a microphone, when he was 5 years old.

Originally from Walters, Lenort now lives in Twin Lakes. He works at Lund Food Holdings as a factory worker in Lake Mills. Lenort graduated from high school in Keister and got his Associate of Applied Sciences degree in radio and television broadcasting from Austin Technical College. He married his wife, Angie Jensen, on June 6, 1998.

He grew up listening to the likes of Hank Williams, Waylon Jennings and Merle Haggard. One singer reigns supreme, though, for Lenort — a man by the name of Johnny Cash. Lenort was always intrigued by Cash’s unique voice, he said. He was given harmonicas that Cash used in a performance during a 1983 show in Bloomington, and in 1996 Lenort got to meet Cash in person when he saw him perform in Mankato.

“It was fabulous, to meet a guy you’ve looked up to for so long,” he said.

Lenort himself started singing karaoke in the early ’80s and hasn’t stopped. He sings country, ’50s rock ’n’ roll, oldies and gospel. When he first started, he said the songs he was singing were backed up on LPs, cassette tapes and eight-tracks.

In 2008, Lenort got the opportunity to open for Roy Clark at Surf Ballroom in Clear Lake, Iowa.

Last year, Lenort traveled down to Tennessee to sing backup on a track for John Berry’s holiday album, the simply-titled “Christmas.” Lenort enjoyed the experience, and said it was interesting to get an inside look into the music industry and to see how it works.

The singer performs all over southern Minnesota, and has some regular places he performs, including once a month at both Good Samaritan Society of Albert Lea and St. John’s Lutheran Community. He sings about every other month in Fairmont and from time to time at Oak Park Place, as well, and said he’ll have once-a-month performances in Faribault starting in 2017. More information on Lenort’s upcoming performances can be found on his website, dunnelllenort.com.

While Lenort sings largely inspiring songs for the most part, he has overcome his share of obstacles.

At 8 months old, Lenort had a stroke that left his right arm and leg paralyzed. He said he had had a fever that wouldn’t break, and said eventually a blood vessel in his head broke, resulting in the stroke. At the time, Lenort said he was diagnosed with cerebral palsy because strokes in children that young were completely unheard of.

In February 2008, Lenort’s wife was diagnosed with cancer. Months later, the couple got into a bad car accident, Lenort said. They were both due at a benefit for his wife’s medical expenses the day after the car accident, but neither of them were able to make it as they were in the hospital from the crash.

Lenort’s wife eventually passed away in 2014 due to complications from cancer.

Since then, Lenort has tried to occupy himself with work; his cat, Tobie, and — of course – with his music.

Before his wife passed away, Lenort had recorded and released his own album, “Coverin’ the Country.” He said he has wanted to get back into recording a gospel CD in the years since, but said it has been hard for him to get back into the studio since his wife’s death.

“It’s been tough,” he said. “You just have to keep moving forward.”

A strong faith and his love of music have helped Lenort do just that.

“I’m enjoying doing what I love to do,” he said. “As long as people will stop and listen … where it takes me, that’s great.”