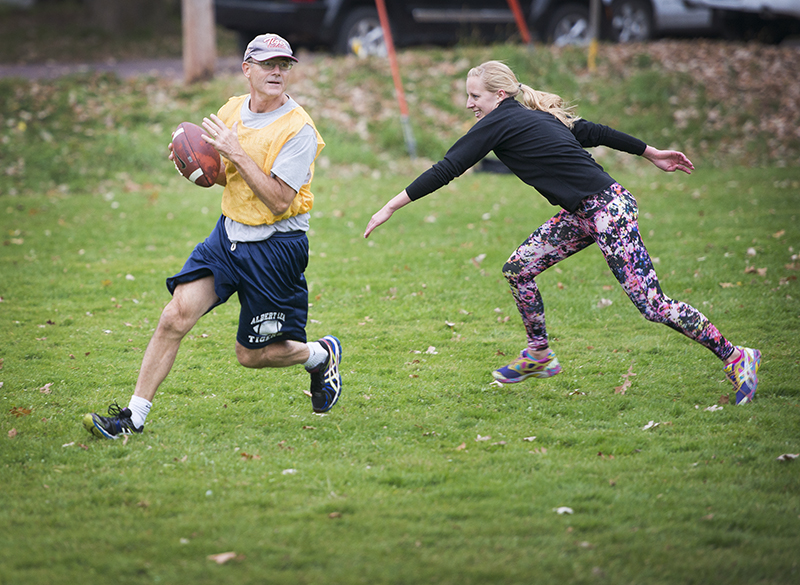 Rick Harves, left, drops back to pass during a practice game in October for this year’s Turkey Bowl — a touch football game played each Thanksgiving in lower Abbott Field on Fountain Street in Albert Lea since the ’70s. - Colleen Harrison/Albert Lea Tribune

Group gets together for 51st Turkey Bowl football game

There is no specific length of time as to when something becomes a tradition.

It just sort of happens, and people call it that.

The Detroit Lions and Dallas Cowboys playing on Thanksgiving Day has been a tradition for years — and something most might like to forget, since both teams haven’t fared well overall in a few decades. In Detroit’s case, never.

In the town of Albert Lea, a different Thanksgiving tradition started over 50 years ago.

Yes, it has to do with football. But more so, the strength and bond of friendships created by a network of kids through the Fountain Street neighborhood of Albert Lea. 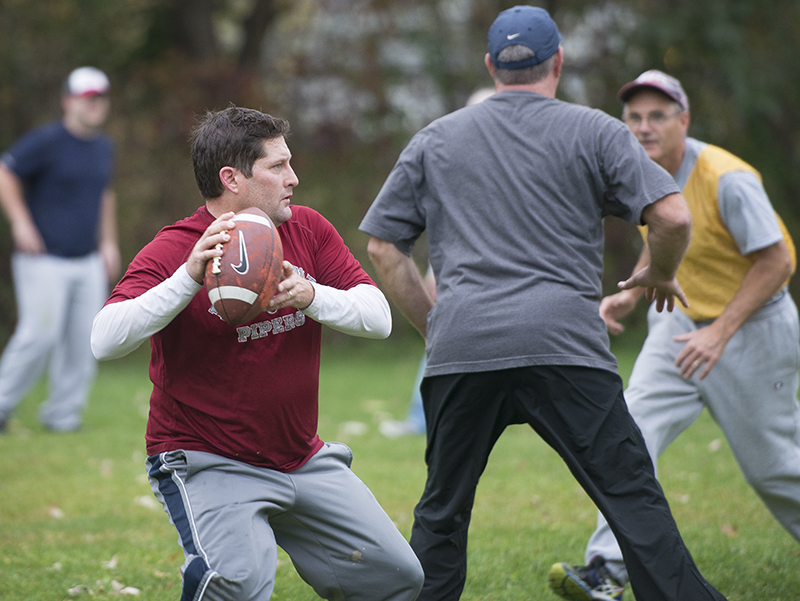 The Turkey Bowl follows some of the rules of touch football, with a few twists added in. Players can pass anywhere — forward or backward — once they’ve passed the line of scrimmage. – Colleen Harrison/Albert Lea Tribune

On one Thanksgiving in 1966, the Albert Lea Turkey Bowl was born because of a few kids were annoying their mother while she was prepping dinner.

Needless to say, she kicked them out of the house and told them go burn off some energy.

Paul Wendorff, a former standout at Albert Lea, and long-time friends Rick Harves and Jim Nielsen were the founding players of the game.

Like any kid back in the day, no one wanted to play alone. So what did they do? They called up all their friends in the neighborhood and told them to meet at the football field. In about 15 minutes, 25 energy-filled teenagers between the ages of 13 and 16 were ready to play. Little did they know that it would be the first of 50 Turkey Bowls. 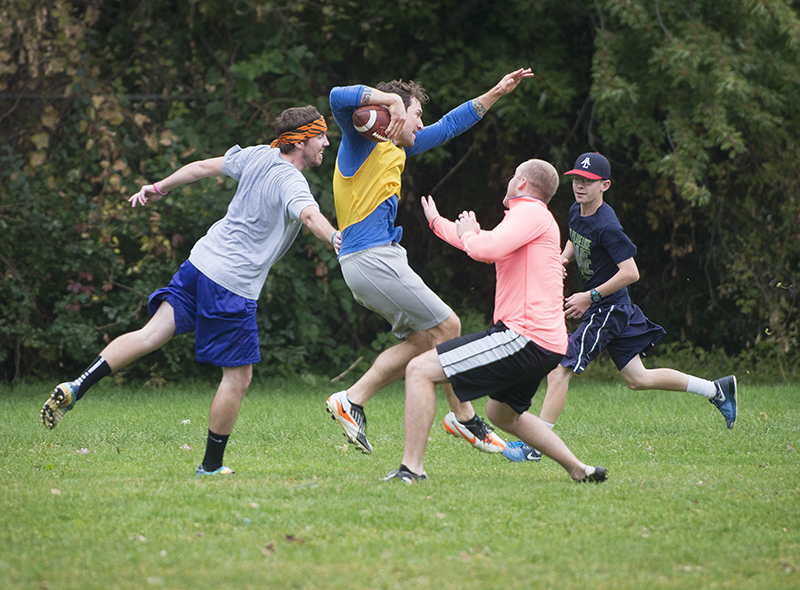 A player gets tagged during a practice game in October leading up to this week’s Turkey Bowl. – Colleen Harrison/Albert Lea Tribune

“We had to do something because Mom kicked us out of the house,” Wendorff said. “But we didn’t want to do it by ourselves. Our neighborhood was full of kids and we all knew each other, so we decided to call up our buddies to see if they wanted to play some football.”

Albert Lea had a lot of athletes during this time and it produced a lot of strong teams with solid results, so finding players to play in the Turkey Bowl was no trouble.

Harves, one of Wendorff’s closest friends, said coming up with the rules to the game was pretty simple.

“We started playing with older kids, who were bigger and faster than the younger kids,” Harves said. “So to make it fair, we kept the rules pretty simple — one-hand touch and pass anywhere. Over time, we evolved the game a bit. Eluding the touch was always the toughest, but it was the most fun. Also, passing anywhere made the game tougher because once you passed the line of scrimmage, you could either pass it backward or forward. We called it ‘jungle ball.’”

But this neighborhood was more than the Turkey Bowl. This group of teenagers played every Saturday and Sunday, and the Turkey Bowl just happened to evolve out of that. 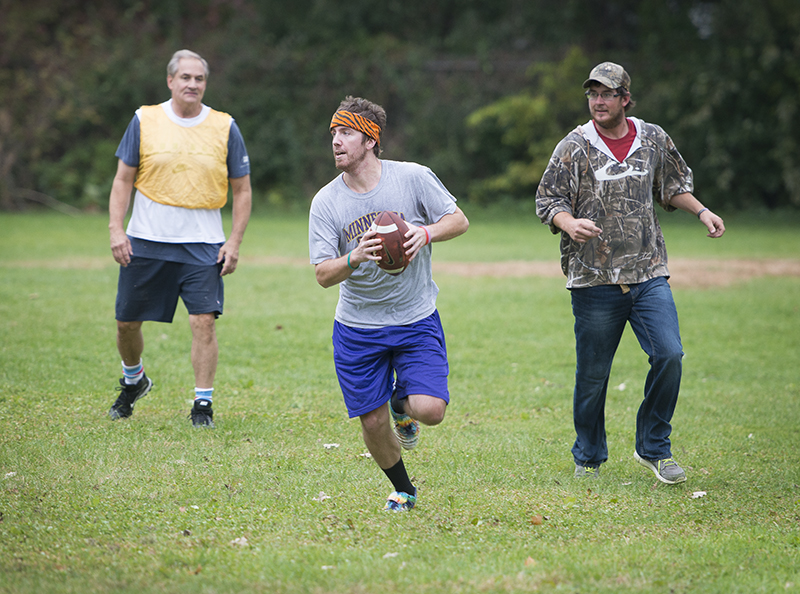 The group also played other games besides ones that involved sports.

“We were always trying to stay out of our parents’ way most of the time,” Harves said. “We were outside a lot, and we played a lot of yard games or we would go on adventures with each other to explore the town. A lot of us played multiple sports. We were always staying active, whether it was baseball, whiffle ball, football or tag, we were always doing something active.”

Once these kids turned into young men and some went off to college, the group didn’t see each other as much. However, they would see each other mostly in the summertime when people came home from college, so they still continued to play games and stay active.

“When people got older, we saw one another fewer times,” Harves said. “Despite that, the Turkey Bowl pretty much became standard for the college boys when they returned home for Thanksgiving break. Everyone wanted to keep the tradition alive.”

There weren’t many girls’ sports back in that time. Title IX — an education amendment that protected against discrimination based on gender — didn’t kick in until 1972, but that didn’t stop Sue Danielson Brethiem from playing in the Turkey Bowl, and no one minded. Actually, they welcomed it. 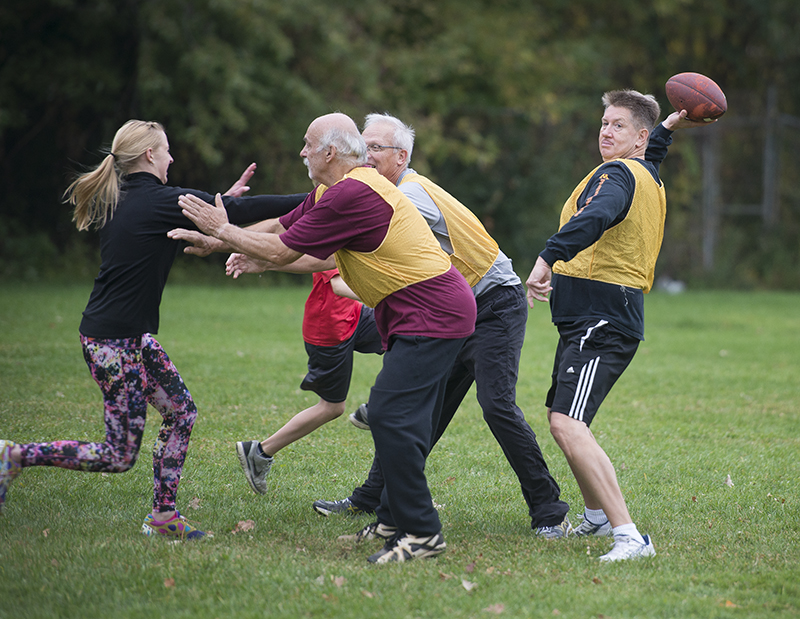 “I was called a ‘tomboy’ back in those days,” Danielson Brethiem said. “But the boys on Fountain Street definitely didn’t treat me any differently. In fact, I was included in a lot of activities outside of the Turkey Bowl.”

Danielson Brethiem’s family lived on the outskirts of Albert Lea until they moved to Fountain Street in 1970.

“My dad encouraged me to be active, despite the limited numbers of sports available to girls,” she said.

Wendorff remembers Danielson Brethiem as one of the better athletes.

“She was extremely athletic,” Wendorff said. “I can clearly remember her burning by a few guys in her day.”

Danielson Brethiem played in a few Turkey Bowls, with her first coming in 1969, before graduating from Albert Lea High School in 1975. She said she hopes to return to a Turkey Bowl one day when her schedule allows it.

“I would love to go back,” Danielson Brethiem said with a laugh. “I have got to hand it to these guys for keeping it going for so long.”

It’s a “Sandlot”-esque story. While kids grow up, move away, get married and start a family, what makes friendships and relationships special is the willingness one puts into it.

“We have always kept in contact, no matter where we move to,” Wendorff said. “We may not talk every day, every week or every month, but we always find ourselves back at the Turkey Bowl. If one of us doesn’t make it one year, there is a good chance we will see each other the next time. That’s what makes it special.”

The group has battled cold, rainy, snowy and sunny Thanksgivings for half a century.

In a few days the group, which now ranges from 25 to 32 players, will meet again for the 51st time.

What makes this Turkey Bowl different from others around the country is that it’s a reminder of what neighborhoods used to be — friends hanging out, enjoying one another, being competitive and having fun. The sizes and shapes of these once-athletes may have changed over the years, but one thing has remained constant — the Turkey Bowl continues to live on.