Betty Gene Heitner, 89, of Prior Lake, formerly of Wells, died Sunday, Nov. 13, 2016, at her home in Prior Lake. Funeral services will be at 11 a.m. Friday at Good Shepherd Lutheran Church in Wells. Visitation will be from 4 to 7 p.m. Thursday at Bruss-Heitner Funeral Home in Wells and will continue one hour prior to the service at the church on Friday. Interment will be at Rosehill Cemetery in Wells. The family prefers memorials to Good Shepherd Lutheran Church in Wells, Wells Food Shelf, St. Andrew Lutheran Church in Eden Prairie or donor’s choice. Bruss-Heitner Funeral Home in Wells is in charge of arrangements. To leave an online condolence, visit www.brussheitner.com. 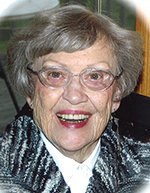 Betty Gene Broadwater Heitner was born July 16, 1927, in rural Preston, the youngest of three daughters of Frank Walker Broadwater and Arlone Aletta Crowe. She grew up on the parental farm, attended grades one through eight in Prairie Queen School and graduated from Preston High School in 1945. Following graduation she attended Manchester College in North Manchester, Indiana, until she entered Kahler School of Nursing in Rochester.

On July 15, 1951, she married Maynard “Buzz” Heitner in Root River Church of the Brethren in rural Preston.

They moved to Wells in June 1952 where they joined Maynard’s parents William and Erna Heitner in establishing Heitner Funeral Home. After receiving her license to practice funeral services she became an integral part of the Heitner family funeral home operation.

Betty was also very active in the community and in her church. In First Lutheran Church (now Good Shepherd Lutheran) she had been a Sunday school teacher, a president of the Doreas Mission Society, choir member and women’s organizations of the church. Betty was a long-time member of the Wells League of Women Voters and the Minnesota Funeral Directors Association.

Betty and her husband retired in December 1986 when they sold their two funeral homes to Stan and Kathy Bruss.

She was preceded in death by her parents; two sisters, Opal (Troy) Schrock and Rubye (Roy) Riehl; and one nephew, Joel.