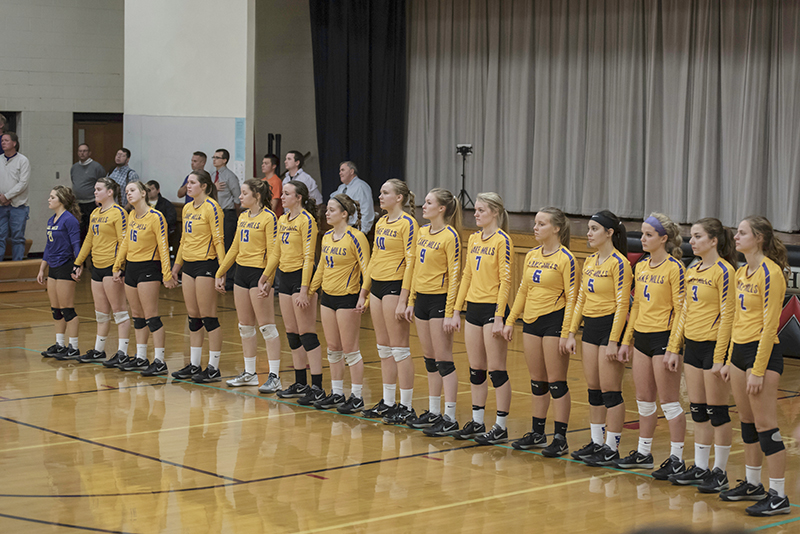 The Lake Mills volleyball team lines up for the National Anthem before its match against Columbus Catholic in the regional final Tuesday night. Lory Groe/For the Albert Lea Tribune

The Lake Mills volleyball was one match away from the state tournament coming into Tuesday’s regional final against Columbus Catholic, Waterloo.

The Bulldogs have run through opponent after opponent this season on their way to a 41-0 record. The Bulldogs had only lost four sets all season, but that would change Tuesday.

In a back-and-forth affair, the Bulldogs had to rally from a 2-0 deficit to send the match to a fifth set. In the fifth set, Lake Mills couldn’t use the momentum it had built up over the previous sets, and it fell to Columbus Catholic, 15-7, ending its run at a state tournament bid.

The Bulldogs fell behind when they lost the first set 25-23. Things were even more on edge when they dropped the second set, 25-22.

But the Bulldogs showed some resilience when they won the third set 26-24, then took control late in the fourth set to win going away, 25-18.

That brought on the all-important fifth set.

Lake Mills couldn’t generate enough rallies to keep up with Columbus Catholic, leading to the loss.

Lake Mills finishes its season with a record of 41-1. It is 81-3 over the past two seasons but has come up short of the state tournament in both years.