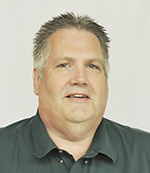 “Twelve years ago this was a major campaign issue,” Shoff said. “It was shelved. The purpose of Bridge Avenue was not just a re-pavement, but to fix the underlying infrastructure needs like sewer and water.”

“I live in a house that has suffered significant flood damage, and it’s happening now almost every year and only getting worse,” he said.

Shoff thinks the board shifted its priority to gravel roads, noting that county spending on gravel roads went from around $150,000 a year to more than $600,000 in one year, which has been maintained while projects, such as Bridge Avenue, were ignored.

“Now, with the wheelage and sales tax producing almost $2 million more a year, every commissioner is talking about roads, but the track record is clear: rural and gravel roads,” he said. “If I am elected, I will work to fix roads like Bridge Avenue and the underlying infrastructure needs.”

Shoff said each person has the right to address the board.

“I would certainly listen to their concerns, I would investigate their complaints, and I would report back to that person what I found,” he said. “I would also be available to meet with anyone who has a complaint about the county board, government and operations.”

He said though it is not possible to satisfy each complaint, it is necessary to sometimes explain positions.

“Open communication — listening and showing a willingness to investigate can often alleviate the mistrust many critics have toward an organization,” Shoff said.

He would explore moving board meetings to evenings on at least a once-a-month basis.

“Meeting times should be selected that provide the members of the community the most convenient time to attend  — should they choose to attend  — and morning meetings conflict more with people’s work schedules than evening meetings,” he said. “I would like to see more people engaged in the meetings of our county board.”

Shoff said the county should work with existing businesses.

“We need to actively promote our area, because beyond tax abatements and increment financing, which most other communities competitively offer, we need to sell Freeborn County,” he said.

Shoff said the county needs to let businesses know it has the resources, labor, safe communities and a strong educational system to entice businesses, and he supports

working with commercial real-estate agents and business brokers who have a compelling reason to bring businesses to Freeborn County.

“We should look to expand our retail footprint,” he said. “While critics often cite retail less than manufacturing, manufacturing is harder to get, and the wage differential between retail and manufacturing has narrowed.”

Freeborn County should look into providing incubator assistance to businesses looking to start and develop in the county, Shoff said.

“While Albert Lea offers assistance, smaller communities within Freeborn County have viable economic opportunities, and the county needs to encourage this potential,” he said. “Incubators allow a startup to have low overhead, more accessible financial and operational resources than one finds on their own, and a location to launch their business.”

Shoff said the state of Minnesota has forecasted Freeborn County will continue to lose population — including dropping to under 30,000 residents, which results in state-mandated changers. Real household incomes are expected to remain flat or slightly decrease, and more people over the age of 65 will have to work because of economic necessity, Shoff said.

“Mower and Steele counties do not face such dire forecasts,” he said. “It is time for action. We need to engage the county in growth.”

To reverse its declining population, Freeborn County needs to promote business growth, its status as a better place to relocate and its post-secondary education opportunities, Shoff said.

“Obviously, Freeborn County needs to grow and expand its working base,” he said. “Freeborn County offers affordable housing and living, even for those who commute to other cities and counties.”

Shoff said he supports responsible county government and proper spending and taxation to improve the quality of life in Freeborn County.

“We should look to merge positions before adding within county government and look for ways to cut spending,” he said. “We should prioritize not just on need but the greater usage — like roads and bridges — and we should work with other areas  — like our school districts  — to provide strong education opportunities for our students.”

Shoff supports working with the Shell Rock River Watershed District to achieve cleaner lakes and with the city of Albert Lea for parks and trails.

“Overall, the quality of life in Freeborn County is good; we can just make it better through growth and responsible planning,” he said.

Shoff said the Shell Rock River Watershed District has a plan that seems to be working.

“The watershed says they are ready to start dredging, an action I think many have waited for and really see as a concrete plan for restoration,” he said. “It might help the watershed if they produced and marketed a comprehensive plan that basically says this is what we’re doing this year, the next three years, the next five years and this is what we plan to achieve in its entirety.”

Benchmarks and accomplishments will help people believe that taxes raised have gone to a worthwhile cause, Shoff said.