Funeral services for Daniel W. Enstad of Albert Lea will be at 10:30 a.m. Tuesday at United Methodist Church in Albert Lea. The Rev. John Mitchem will officiate. Interment will be in Hillcrest Cemetery. Visitation will be from 5 to 8 p.m. Monday at Bonnerup Funeral Service and one hour before the service at the church.

Dan graduated from Albert Lea High School with the class of 1975 and continued his education at Austin Vocational School in the tool and die program. 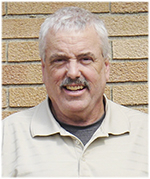 In 1989, Dan and his business partners founded Interstate Molding and Manufacturing, an injection molding manufacturer, in Albert Lea. In his 27 years, Dan was instrumental in developing the success of IMM and the business has continued to grow and flourish. Dan is remembered for his commitment and joy his profession gave him.

Dan was an avid outdoorsman and loved any chance to be outside. His favorite activities were hunting, fishing, boating, snowmobiling, biking, camping and traveling up north. As an enthusiastic sports fan, he followed the Minnesota Vikings, Wild, Twins and every Albert Lea hockey home game he could attend. Dan was especially honored the year he received the Fan in the Stands Award from the high school hockey team.

Other interests included attending concerts, listening to country music and attending the county and state fairs.

Above all, Dan loved his family. He enjoyed the excitement of Christmas, went on as many trips as he could to visit his children and loved hunting with his son, David. Dan took every opportunity to spend time and share experiences with Jean and the kids.

Dan is survived by his wife, Jean, of Albert Lea; two children, Anna Enstad of Des Moines, Iowa, and her fiance, Patrick Fischer, and David Enstad (and his girlfriend, Destany Pehler) of Winona; his mother, Irene Enstad, of Albert Lea; sister, Diane (Wayne) Schlosser, of Alden and their sons Robert and Ryan; father-in-law and mother-in-law Philip and Marge Johnson of Albert Lea; and sister-in-law, Nancy (Wade) Carlson, of Albert Lea and their children Matthew (Kaleigh) Carlson and sons Braylon and Canaan, Heather (Ryan) Reule and their daughter, Elizabeth.

He was preceded in death by his father, Leonard.

Dan touched the lives of many individuals and he will be greatly missed by family and friends.