He was baptized and confirmed at First Lutheran Church. In 1948 he graduated from Albert Lea High School. He was a member of the National Guard and in 1951 he enlisted in the United States Army. He was a platoon leader in the 25th infantry. He served in the Korean War and was honorably discharged in 1952. 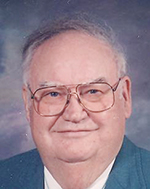 Dean went to Mankato State Teachers College under the GI bill and graduated in 1957 with a Bachelor of Science. He began his teaching career in Hector that same year, where he started the wrestling program.

On July 26, 1958, he married Lora M. Willers in Luverne. In 1962 Dean began teaching social studies for Waseca Public Schools. Dean served as head varsity wrestling coach, retiring in 1973. He also was the assistant varsity head football coach and seventh- and eighth-grade head football coach. While in Waseca he was involved in the American Legion, church council and president, founding member of the Don Eustice Scholarship Committee, Fellowship of Christian Athletes, Jaycees, Lions, Military Order of the Cooties, Waseca Booster Club, Waseca Education Association and the Veterans of Foreign Wars. He was a member of the VFW for over 50 years and served in the local, district, state and national chairs. From ’87 to ’88 Dean was the state VFW commander.

In 1990 he retired and later moved back to his hometown of Albert Lea. There he also became involved in the Freeborn County Historical Society, Retired Teachers Association and Kiwanis. Dean was a member of Trinity Lutheran Church in Albert Lea and St. John’s Lutheran Church in Waseca.

He is survived by three children, Cheryl (Michael) Clevenger of Morristown, Karen Fliflet of Appleton and Karla Means of Eagan; four grandchildren, Amanda Monn, Matthew Clevenger, Melissa Geyer and Kyle Clevenger; and three great-grandchildren, Kylie, Carsen and Karlee Geyer. He is also survived by one sister, Joy Christian, of Albert Lea; one brother, Frank Means, of Albert Lea; and many nieces and nephews.

Dean loved his family and his country with his whole being. His smile was contagious and his love of life ever present. He will be greatly missed by his family who loved him deeply and by those whose lives he touched along the way.

Visitation will from 4 to 8 p.m. Friday at Dennis Funeral & Cremation Services in Waseca and will continue one hour prior to the service at the church on Saturday.

Funeral services will be at 10:30 a.m. Saturday at St. John Lutheran in Waseca. Burial with military honors will follow at Woodville Cemetery in Waseca.