Graveside services will be at a later date for Dorothy B. Burglund of Albert Lea, who died Sunday, Nov. 27, 2016, at St. John’s Lutheran Community in Albert Lea.

Dorothy was born March 6, 1921, in Minneapolis, the daughter of Harold and Minnie (Erickson) Follos. She was a graduate of Minneapolis South High School. 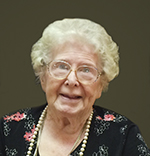 On Feb. 24, 1940, Dorothy eloped with her fiance, Wesley Burglund, and they were married in Northwood.

Dorothy raised three beautiful children who were her pride and joy. She worked as a bank teller in Minneapolis and Robbinsdale, but her true love was music. Dorothy served as a choir director in church for much of her life and she always had a song to sing. She spent her time crocheting, doing ceramics, collecting porcelain dolls and doing counted cross stitch. She loved playing bingo and doing crossword puzzles. She often said that she had to keep her hands busy! She loved “The Wizard of Oz” and had a large collection of anything related to the movie.

Dorothy moved to Albert Lea in 1990 to be closer to her Minnesota family and was a member of Salem Lutheran Church.

She was preceded in death and now reunited in heaven with her darling husband, Wesley; her parents; and two sisters, Gladys Krantz and Marion Stevens.