Former ‘person of interest’ in Wetterling case to sue sheriff 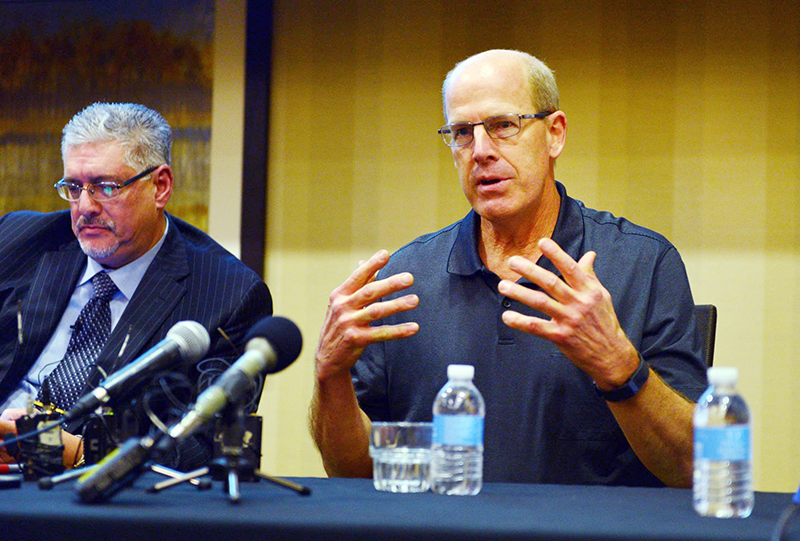 Daniel Rassier recounts some of his interactions with the Stearns County Sherriff’s Office during a press conference on Tuesday in Brooklyn Park. - Sam Harper/For MPR News

Dan Rassier, 53, of St. Joseph said he is suing the Stearns County Sheriff for naming him a person of interest in the 1989 kidnapping of Jacob Wetterling.

It ruined his reputation to be wrongly accused in the high-profile case, Rassier said at a press conference on Tuesday announcing the lawsuit.

He accused Sheriff John Sanner of ignoring evidence from the FBI gathered shortly after the abduction that pointed to Danny Heinrich — who eventually confessed to the crime. Heinrich was sentenced this week to 20 years in prison on a child pornography charge after admitting to abducting and killing Jacob.

In 2010, Sanner publicly named Rassier, a neighbor to the Wetterlings, a person of interest in the case.

Being investigated for the crime without any evidence, Rassier said, was a nightmare for his family.

“The stress is unbearable,” he said. “It was unbearable for my dad, and we really believe that he died an early death because of the stress.”

Rassier previously told MPR News that he planned to sue law enforcement, and that police treated him like a killer for years — until Heinrich confessed earlier this fall.

Authorities dug up Rassier’s yard, secretly recorded him, dove into his love life and put him under hypnosis for an interview with investigators.

Another man also announced his intention to file a lawsuit against Sanner on Wednesday, saying he was wrongly accused in a separate case.

Ryan Larson was arrested in connection with the 2012 killing of Cold Spring police officer Tom Decker, but authorities later declared him not a suspect.

Larson, who accused Sanner of violating his constitutional rights in a wrongful arrest, said he received death threats and suffers from PTSD.

“If there’s accountability taken on the part of Stearns County,” Larson said, “I think it will definitely help in preventing it from happening again. The ordeal I went through, I wouldn’t wish it upon anybody.”