Having a bad day? A drive in the country may help

The weather seems to be in a holding pattern right now, and I have to say it is a good thing when it comes to heating bills and snow shoveling. I cannot recall a fall quite like this one — but I’ll take it.

Now is a good time to observe wildlife, and there is no better time to do that than the present. I can recall a time, a few years ago, when I was having kind of a stressful day, so after work I decided to take a little drive in the country.  In a way it was like taking a drive down memory lane, because I drove down a few gravel roads I hadn’t been on in some time just to see how some places that were once home to people who I know had changed.

On my trip through the countryside, I spotted some turkeys and rabbits, and in a freshly-picked corn field stood a red fox that was busily digging for what I would guess was some kind of rodent. What made it even more special is the fact all of these critters were spotted not all that far from home. It takes no more than a glimpse into my backyard on any given day to spot a gray squirrel or a rabbit. Up until a couple of years ago, I would take an early morning walk almost daily. Over the years, I have seen a variety of animals. On a couple of different occasions, I have had deer run across the street right in front of me. One early morning, as I walked the sidewalk on Newton Street, I noticed something out of the corner of my eye and as I turned my head, there was a red fox prancing down the middle of the street. The fox seemed oblivious to the fact I had joined him on his stroll down Newton. As the fox passed me, he cut in front of me and eventually disappeared into some brush behind one of the houses. This encounter with wildlife right within the city limits left me with a good feeling. I enjoy observing wildlife in its natural habitat, and any time I can observe wild critters in their natural habitat, I get a good feeling — one that tells me that nature still has many pleasant surprises in store for us. 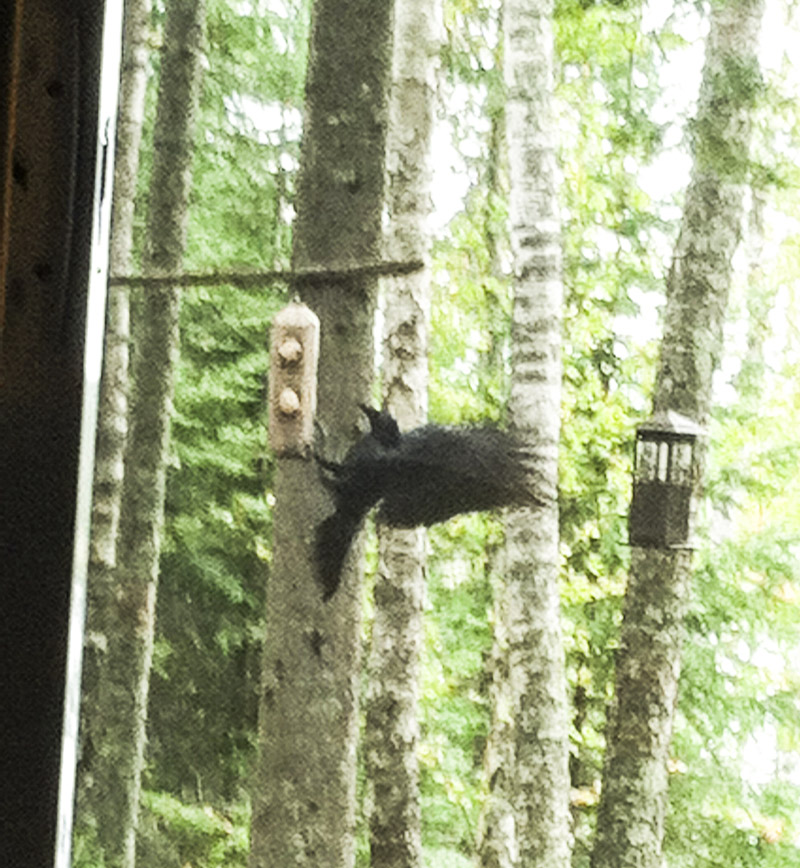 A raven is hungrily attacking a suet feeder at the Herfindahl cabin in northern Minnesota. Dick Herfindahl/Albert Lea Tribune

When I am spending time at our cabin, I enjoy watching the birds and critters that can come visiting at any given time. I am not particularly fond of raccoons with their faces masked as they make a midnight raid on my bird feeders. One week, when Trevor, my oldest grandson, was at the cabin with me, he decided to sleep in the recliner inside the cabin, gun across his lap, while facing the feeders. He said he would awaken at the slightest noise and was intent on eliminating those destructive little bandits. Unfortunately, the critters again raided the feeders and were gone without waking the guardian of the feeders. I eventually figured out a way to keep them from reaching the feeders by suspending them from wires strung from tree to tree.

The feeders were now raccoon-proof and life was good. That is until this spring when a bear decided those feeders were an easy meal. The   bear even ran off with the new feeder that my son, Brian, and family had given me for Christmas. A couple of days later I had the bear I suspected to be the culprit run across the road in front of me a couple of miles from the cabin.

This year while at the cabin I was lucky enough to see not only that bear, but numerous deer, grouse, a badger, squirrels, chipmunks, hawks, eagles and a couple of jack rabbits, which you seldom see in our area these days. I had quite a variety of birds at the feeders this year and there was also a raven or two that visited. The ravens loved the suet feeder, but they had to share it with the pileated woodpeckers that were residing close by. One raven in particular was at the feeder quite often while its mate was on the ground scavenging for leftovers.

I have always loved to fish, but I have discovered I can also get a lot of enjoyment out of watching the many types of critters that inhabit the north woods.

Until next time, get out to one of our area parks and enjoy spending a little time bonding with nature while the weather is still holding. Don’t forget that there is still a lot of good fishing ahead before the water hardens.